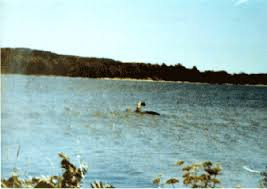 Leave it to Don Wildman to seamlessly weave history and fantasy together in the form of Champ, the lake monster, that presumably still resides in Lake Champlain.  Even Jeremy Wade got curious and took his search for "river monsters" to the shores of the Vermont lake.  Turns out he was more interested in reports of sea lampreys attacking humans the same way they attack fish, by boring a hole through the skin and sucking out the blood.  Wildman didn't reference his cable channel pal in his segment.  Instead, he made his connection to the man who discovered the long lake that straddles the New York-Vermont border -- Samuel de Champlain.

Wildman uses a photograph taken by Sandra Mansi in 1977 as his starting point to tell us about Champ.   Mansi's photograph really doesn't say much.  In Wildman's recreation of the event, bubbles first appear on the lake surface, not far away from where her two kids are playing in the water, before a long trunk-like shape emerges from the depths of the lake.  My first reaction was that a large tree branch popped to the surface, but that would be too prosaic.

Rather, we get a short discursion into Plesiosaurs, which existed over 65 million years ago, and that maybe a few might still be swimming around in Loch Ness and Lake Champlain.  Even the museum curator was dubious of such a possibility, as it would take quite a pod of these creatures to have survived to still be producing offspring, and the sightings wouldn't be so rare.  But, this doesn't deter our man Don, who offers us artists' recreations of the 20-foot long prehistoric monster that would have been quite a menacing beast of prey in its day.  I'm sure it would have long ago left its mark on the many people that frequent the Lake Champlain region if it had miraculously survived the great dinosaur extinctions.

Champ, however, has been made into a friendly mythic creature, with local celebrations held in his (or her) honor.  The early local natives had their own name for the beast, which they called Tatoskok, that might have influenced Champlain's fervid imagination.  Such a creature would have a voracious appetite and some used it to explain the reason for the depletion in smaller lake fish over the years.  As it turns out, the sea lamprey is the real culprit, which this NYTimes article noted in 1985, and Wade further demonstrated on River Monsters.  But, it is hard to let go of those myths, especially when they draw tourists to your lake shores.  I suppose that is why Wildman's Monumental Mysteries is on the Travel Channel.