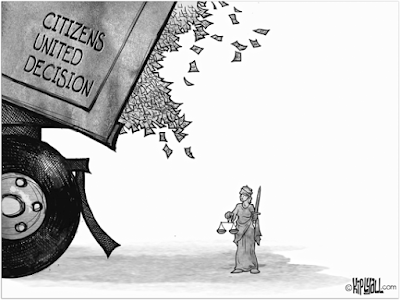 Citizens United v. FEC unleashed a flood gate of money into the election cycle that had many fearing that the little guy no longer stood a chance with corporations pouring in millions to their favorite candidates and causes.  But, who would have thought billionaires could be so stupid?

To read this article in New York magazine, you have to be a complete idiot to put your money behind Newt Gingrich, as Sheldon Adelson did in 2012, giving the former House Speaker a blank check.  Sheldon outdid himself this time around by initially bankrolling Lindsey Graham.  Sheldon has since auditioned other candidates, but apparently it is pretty easy to find your own billionaire, as Ted Cruz and Marco Rubio have done, so you don't need the Las Vegas gambling mogul behind you to win.

With so many billionaires looking for a would-be President to have in their pocket, it has become a field day for Republican strategists and pollsters cobbling together Super Pacs in the name of one presidential candidate or another.  Win or lose, these campaign operatives make millions, like Kellyanne Conway, who manages Ted Cruz's Super Pac, Keep the Promise I.

Billionaires were incensed with Karl Rove last time around, as he got them to ante up more than $100 million for his Super Pac, American Crossroads, that was guaranteed to get Mitt Romney elected.  No wonder Karl was sweating when the Ohio precincts started rolling in on election night with Obama holding a five point lead over Mitt.  Karl lost it on national television and is now consigned to the "political Siberia."  One billionaire actually tried to sue Rove over his false prognostications.

The money these guys put into presidential campaigns is relative small change.  The smart ones create their own Super Pacs and push through candidates at the state level where most of their interests lie.  Case in point, the Koch Brothers.  However, you get guys like Carl Icahn, who is willing to cough up $150 million to get corporate tax reform, when the average corporate tax paid is 12.6 per cent, about one third of the actual rate.  Many corporations reported paying zero taxes in 2014.  With rates like that, Icahn is fighting an uphill battle.  It just makes you wonder how these guys got so rich if they make such poor investments in politics.  BTW, Trump wants to make Icahn his Treasury secretary.

These guys have been labeled "activist investors" because they are supposedly more savvy now and are paying for their own political consultants to help them make the right choices.  I guess we can chalk it up the relative infancy of corporations being bestowed the same rights as a citizen.  After all, it has only been five years since the infamous Citizens United decision gave these corporations unlimited political spending opportunities.

Not only has Donald Trump made a mockery of the power of the Super Pac, but so too has Bernie Sanders, who has staged a grass roots campaign that is outstripping Hillary's well endowed campaign.  It may be in the end that the power of the Super Pac proves too much for these insurgent candidates, but if there is anything we have learned this election cycle it is that the power of the social media is now very formidable, and a savvy politician and his backers need to learn how to harness it.  Trump has had to invest very little of his own money into his campaign to date, thanks to the far reach of twitter and instagram.

But, it seems that many "activist investors" still work with the old paradigms.  One can excuse Carl and Sheldon, as they are both around 80, and obviously not tuned into these things.  Carl probably still thinks the corporate tax rate is 50%, as it was under Eisenhower.  But, younger billionaires should get with the game.

On the plus side, it means insurgent candidates of all stripes don't need to be afraid of Citizens United, as they can take advantage of the fast-moving social media to outflank their much better financed opponents.  A kind of Guerrilla warfare that is driving guys like Jeb Bush nuts, as his Super Pac has invested over $30 million in campaign advertising only to see a pathetic 3.8 per cent return on its investment.  That is how much Jeb is polling right now.

This bodes well for Congressional and state legislative candidates as well.  The Republican House #2 man, Eric Cantor, got trounced by virtually unknown Dave Brat in 2014, despite outspending him five to one.  And, this was just in the primary.  Brat went onto win the Virginia House Seat in November.

It's not to say that days of big money are over, but the Super Pac is only as good as the candidate himself.  If you put your money behind a lame horse, you can't very well expect to win.  Sheldon Adelson, among all people, should know this.

Posted by James Ferguson at 5:20 PM