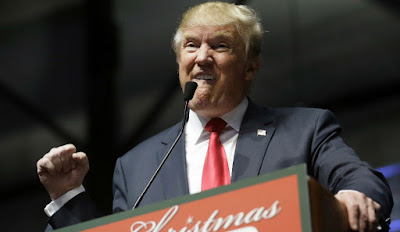 "You can't con people, at least not for long.  You can create excitement, you can do wonderful promotion and get all kinds of press, and you can throw in a little hyperbole.  But, if you don't deliver the goods, people will eventually catch on." -- Donald Trump from The Art of the Deal

Donald Trump has now officially inserted his "schlong" into this political campaign.  Just when you thought the bar couldn't be lowered anymore, Trump finds a way.  His comments concerning Hillary Clinton come after she claimed ISIS was using him as a recruiting tool in their videos.  No such video could be located, just like that one of Jersey City Muslims cheering in the streets, but the Donald wasn't letting Hillary off lightly on this one.  Not only did he deride her for her long bathroom break during the last Democratic debate, but said that she got "schlonged" in the 2008 primaries by Barack Obama.

Bernie's response was probably the best, as he questioned Donald's knowledge of human bodily functions, at least in regard to women.  Since Donald has already referenced menstruation in regard to Megyn Kelly, maybe he thought Hillary was menstruating, which is why he regarded her bathroom break to be so disgusting.  But, as Bernie noted, Donald doesn't seem to understand women at all, especially those who have already gone through menopause.

No matter, this has become Donald's shtick.  The more outrageous he is the more he can get the press to focus on him at the expense of others.  Donald has done his level best to keep this election off topic, or rather make the topic himself.  Any attempt to address actual issues has been buried under this steady stream of his blatantly false and misleading claims, ad hominems, and self-aggrandizement.   The media is still poring over his claims that Muslims were cheering in the streets of Jersey City while the Twin Towers burned, one of many lies that led PolitiFact to lump them all together into its "Lie of the Year."

Believe it or not, these are the top three GOP candidates!  It seems that a large chunk of the conservative electorate is totally oblivious to the truth,  These three candidates currently command almost two-thirds of the Republican polling audience.  This is bad news for establishment candidates, who are not prone to tell the truth either, often blurring the lines with half true statements that are just as misleading as Donald Trump, albeit not as colorful.

It's not like the RNC can penalize its candidates for crudity, which the NFL did to Odell Beckham Jr. after his ugly display this past Sunday against Carolina.  All it can do is publicly rebuke them, as it has done Donald on several occasions.  Not that it does much good.  What the Republican National Committee is finding out the hard way is that a significant portion of its electoral base identifies with this kind of crudity, and believes that Donald Trump is a "straight talker."

The funny thing is that he is quick to step back from his more outrageous statements, claiming the media misinterpreted them, as he did when questioned on his remarks about Megyn Kelly's bleeding.  He finds it "disgusting" the way the media  attacks him, identifying with Putin's antagonism toward the media in Russia, although of course he wouldn't go so far as to condone violence toward journalists, even if they "deserved it."

At one rally after another he points out the reporters in the back of the hall to his audience and disparages them.  It can be quite scary, as his audience turns to focus their menacing eyes on these no-good reporters who dare to challenge their beloved candidate.  Protesters suffer similar abuse.  So far, no one has been hurt but then the primaries haven't even started yet, and that is when tempers are really going to flare.

All this feeds the fire that has become the Donald Trump campaign, and now he is bringing Hillary into it as he seems to think he has already wrapped up the GOP nomination with a 15-point lead over his nearest challenger, Ted Cruz.  Apparently, it is now time to whip out the schlong.