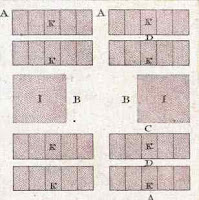 Alan Taylor doesn't describe the Oglethorpe plan for Savannah in much detail, as it is worthy of a book in its own right.  From the start the British social reformer imagined something different for Georgia that would set it apart from the other colonies.  Part of that was comprehensive town plan that remains the predominant feature of Savannah today.

Oglethorpe was probably the first of the transplanted English nobleman to be a product of the Enlightenment, unlike the religious Puritans, the unscrupulous speculators and land barons that came before him.  As such, he imagined a colony built more on a strong ethical philosophy rather than religious dogma or speculative interests.  Key to this vision was a distinct city plan that encouraged the kind of fraternity he imagined among the new colonists.

The Oglethorpe Plan is simple in concept.  Each super block was essentially designed to support itself, looking a bit like a Chinese trigram.  Over the nearly three centuries since its inception, each super block has taken on its own unique identity making Savannah one of the most picturesque cities in America.  The plan was picked up by other Georgia towns as well.

Like most Utopian dreams, Oglethorpe's vision eventually fell apart, which Taylor describes.  Georgia soon became like all the other British southern colonies, heavily reliant on large scale agriculture and slave labor.  Oglethorpe was charged for mismanagement and returned to England.
Posted by James Ferguson at 2:53 PM