Have we seen the last of Trump? 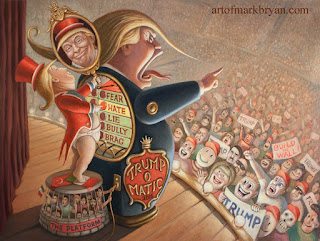 One almost gets the feeling that Trump wants out of this election.  May numbers show him with only $1.3 million left in the tank, as opposed to Hillary running on $42 million.  In May alone, she raised well over $25 million.  Trump almost nil  His campaign is in such disarray that he fired Corey Lewandowsky, best known for roughing up reporters, and staged a "Trumpathon" in which he would match e-mail donations dollar for dollar.

He's already been called out for funneling much of the money he "loaned" himself back into his own enterprises.  It's an old story, but one being circulated much more now.  He finally donated money to Wounded Warrior and other veterans' organizations, when he was called out in the press, but it was far less than he initially claimed.  All this makes his campaign look more like a money laundering racket than a legitimate presidential candidate.  He continues to rely heavily on twitter to get his message out, which sounds increasingly more shrill.

There are rumors that the Republican establishment is plotting a putsch at the convention.  It's all the talk in the blogosphere, pro and con.  It does appear someone has to step in and do some damage control, as it is not just the White House but the vast majority of seats in Congress that are up for grabs in November.

Trump has been notably irked that he has failed to get rousing support from Congressional Republicans and conservative state leaders.  After his long string of gaffes, especially his unscripted comments following the Orlando shooting, it is surprising there is anyone left on Capitol Hill who would support him. Right now, he is seen as a serious liability for Republicans.  So much so, that George W. Bush has been called in to stump for embattled GOP Senators.

Not that Trump cares.  He's more worried about saving face.  After all, he made all these in-roads into a whole new demographic of conservatives and an embarrassing putsch at the convention or worse a drubbing at the polls in November would make him look like the thing he reviles most -- a loser!  So, what to do?

I suppose he could cite some reason for abandoning the campaign as Ross Perot did in 1992.  He could claim Obama has launched a special investigation against him or that the Hillary campaign has threatened to release embarrassing photos of him when he was a little boy or whatever.  His loyal Trumpkins would buy almost any reason.  But, like Ross, it is hard to imagine Trump would stay out for long and he would probably re-enter as an Independent, claiming that it was the Republicans who sabotaged his campaign.

It is painfully obvious at this point that Trump never expected to get this far.  He was mostly looking to increase his brand appeal.  He rarely had a prepared speech much less a position on any issue.  When he sat down with the editorial staffs of the Washington Post and New York Times he made a total embarrassment of himself, but it didn't matter in the Republican primaries, as conservative voters viewed these two national papers with derision.  When he chose to strip WaPo of its press credentials at his rallies, his audience cheered.  It doesn't matter that he was not on good terms with conservative rags like Breitbart or The Blaze either.

For the past year, Trump has essentially given us a Vaudeville act, dragging in just about every scruffy conservative character you can imagine from Sarah Palin to Ted Nugent to Mike Tyson, and a few you would be surprised by.  What on earth does Loretta Lynn see in Trump?  He's gotten political endorsements from also-rans like Chris Christie and Ben Carson, former VP Dick Cheney, and a small sampling of Congresspersons present and past, all of whom he has paraded on stage to his audience's delight.  Big Chris often stands behind him at rallies like one of his bodyguards, and Doctor Ben is purportedly heading up his VP search, offering screening examinations for the prospective nominees.

Most of these politicians and celebrities are rejects, driven to the fringe of the party, who Donald has warmly embraced and brought right back into the spotlight, as in one of his celebrity reality shows.   While it has provided great entertainment value, these are persons the GOP didn't want to be reminded of in an election year they thought they could easily win back the White House after what they perceived to be as the disillusionment with Obama these past seven and half years.  A GOP presumptive nominee has never fallen so low in the polls.  Trump is polling horribly among women, Hispanics and Blacks.  At this rate, he would do worse than Goldwater did in 1964.  This crazy act may have served him well in the Republican primaries but for the upcoming general election Trump is bottoming out.

So what happens at the convention?  Will the Republican Party try to saddle Trump with a VP they think can balance the ticket or will they try to push him out entirely?  The first option won't really work as Trump isn't going to play nice.  He's already shown that in the wake of the Orlando massacre.  The second option threatens to turn the convention into a brawl.   That leaves a third option in which Trump steps down himself for whatever reason of his choice and the GOP fills the void as best it can.

The Republican party will have a lot of catching up to do as Hillary is off to a fast start in the general election, but at this point anything is better than allowing Trump to continue his campaign.