The Curious Case of Judge Curiel

... and the never-ending story that is the Donald Trump Campaign 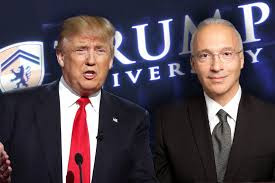 One would like to think that Trump's latest outlandish comments would be enough to tip more discerning Republicans over the edge, but as Amy Davidson writes, "partisanship has become a sort of learned helplessness."  Having been forced to swallow Trump, the GOP now struggles to keep him down, but it is proving more difficult after he demanded that a judge of Hispanic descent recuse himself because his "Mexican heritage" makes him biased toward his case.  Paul Ryan called this the "textbook definition of a racist comment."

So, what to do?  Apparently circle the wagons as not even the GOP wonderboy is willing to distance himself from Trump out of fear of being "Cantored," as Sarah Palin bluntly put it.  Like many Republicans, particularly young Republicans, he wants to stay in power a long time and right now it appears the Donald is calling the shots in the party and there isn't much any of these guys can do about it.  It's either lead, follow or get out of the way.  Well, you can scratch "lead," as Donald has assumed the leadership, and getting out of the way only makes you open to derision as Susana Martinez found out at a Trump rally in Albuquerque.  Still, she is willing to meet with Trump to discuss their differences and see if there is a way to work together for the good of the party.

If the Judge Curiel comments weren't enough to send any sane Republican heading for the offramp, as Amy put it, I don't know what is.  He basically outlined who he would appoint as judges on the bench, and Hispanics need not apply.  11 hours ago, Trump posted a 700-word statement on his website saying his words were misconstrued.  No apology.  It is just another useless screed saying how good a guy he is and that he has only the best intentions in mind.  He tried to switch gears and make it sound that Judge Curiel is unfairly examining his case based on the rulings he has received.  I took the link from Vox, as you can't enter Trump's website without going through a "captcha check," which also asks for a donation.

As we have learned throughout this campaign, Trump can't stand to be questioned.  You can well imagine how hard it must be to work for him, as this is a guy who takes only his own advice and looks to others to do damage control.  This is essentially the role the Republican Party now finds itself in, with Ryan, Mitch McConnell, Bob Corker and others going on the talk show circuit trying to address the fallout from his latest outlandish comments.  It's going to be a long haul, boys, as we've only gotten started.

I think the best strategy at this point would be to give up on Trump and focus on Congressional and state elections.  Unfortunately, that is easier said than done as the Democrats will go out of their way to attach Trump to the Republicans, just as the Republicans went out of their way to attach Obama to the Democrats running for office in the 2014 midterms, when his popularity was at its lowest ebb.

The other option is to try to manufacture a crisis that would shed a bad light on Obama and thereby shine it on Hillary as well.  They have been doing that for 7+ years so they should be pretty good at it by now.  Unfortunately for the GOP, Obama is enjoying his highest favorability rating since he first came to office, largely because he has learned how to bypass Congress and state attempts at blocking his initiatives.

One would say the GOP is fucked, but it is still 5 months to the general election and anything could happen.  Who knows, Hillary might actually get indicted? as so many conservative pundits gleefully predict.  Trump himself has said the first thing he would do when he came to the White House is have his attorney general prosecute her.  Apparently, Chris Christie is his presumptive attorney general.  However, right now it looks like Donald Trump is the one more likely to get indicted or at least be forced to pay a hefty settlement with all those disgruntled students who got fleeced at Trump U.

For all the talk of Hillary's personal e-mails, it is Donald Trump's university that is the target now.  Something that obviously started as a lark but soon became unmanageable and the only thing left to do was try to cover your ass.  One aggrieved former student compared Trump U. to going to an expensive restaurant, enjoying a five-star meal only to get food poisoning afterward.  That's basically Trump's campaign in a nutshell, only his campaign has been more like Denny's restaurant.