A less than perfect union 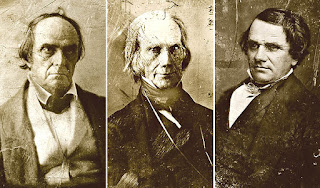 Another book released earlier this year takes us back to The Great Debate of 1850, which many felt saved the Union.  The photos attached to the NYTimes article make Webster, Clay and Douglas look like vampires Lincoln might have slain, but offers a very favorable review of Fergus Bordewich's book.  One has to wonder about all the compromises that "saved" the union, such as the Fugitive Slave Act that came out of this great spirit of reconciliation.  It seems such laws at best deferred a civil war rather than ease sectional tensions.

Meanwhile, Allen Guelzo gives a new "macro" vision of the Civil War in Fateful Lightning, looking at events before, during and after the war, such as the Dred Scott decision and Reconstruction.