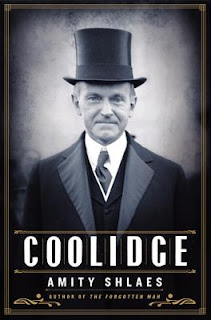 I was wondering where all this love for Coolidge came from.  Seems like Amity Shlaes has been busy recasting Coolidge as the paragon of fiscal conservatism.  Here she is plugging her previous book on The Great Depression, downplaying FDR, and playing up Hoover.

Glenn Beck not so long ago came out with a book Cowards, where he took progressives to task, including Theodore Roosevelt and Herbert Hoover.  Instead, he chose to cite the courage of Harding and Coolidge.  You can read the introduction here, if your stomach can bear it.

We really do have an attempt taking place to rewrite the narrative of the 20th century.
Posted by James Ferguson at 2:51 PM