The Thrilla in Manilla 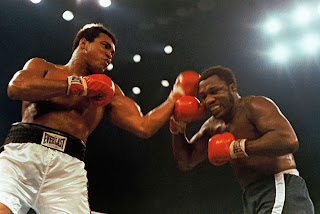 I don't know who we have in the way of boxing fans, but today marks the day of one of the greatest fights in boxing history.  There was a documentary made a few years back on the fight, which pitted bitter rivals Joe Frazier and Muhammad Ali in one of the most brutal fights in modern boxing.  As a documentary it wasn't as good as the superlative When We Were Kings, which documented Ali's epic win over George Foreman the previous year in Kinshasha, known as the Rumble in the Jungle.  Unlike Frazier and Ali, Foreman and Ali remained friends.  I'm not sure what it was that caused so much animosity between Frazier and Ali. 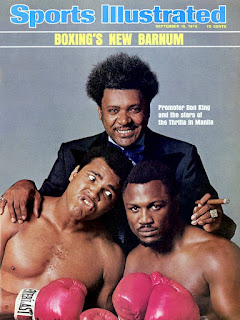 Of course, there was Ali's endless stream of taunts leading up the fight, but he did that with every opponent.  Joe Frazier took those taunts more personally given their relationship in the past, but I have to think much of this banter was encouraged by Don King, who promoted the fight.  This documentary exposes some of the sources for this blood feud, as well as explores the motivations for the fight, including Imelda Marcos' attempt to deflect attention away from the unrest in the Philippines at the time.  What this documentary succeeds in most is making you feel empathy for Joe Frazier, although I don't think he was the "victim" portrayed here. 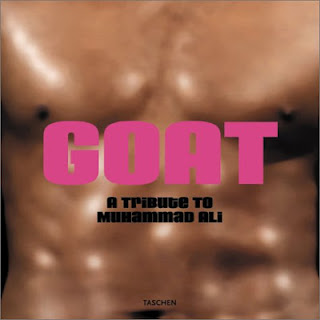 Ali has been the subject of much adulation over the years, especially with him suffering from Parkinson's disease.  Perhaps the most celebratory book is this mammoth monograph put out by Taschen.  But, one of the best books is Muhammad Ali: His Life and Times by Tom Hauser.
Posted by James Ferguson at 1:38 PM