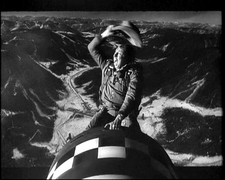 According to Stone, there was never a more precipitous time during the Cold War than during the Kennedy administration.  Not that he holds Kennedy personally responsible for it.  He thrusts most of the blame on the  Joint Chiefs of Staff, notably Gen. Curtis LeMay, for creating this highly volatile time.  The JCS ordered the military to Defcon 3 during the Cuban Missile Crisis, with over 25,000 troops deployed in Southern Florida and fighter jobs hovering low over Havana.  ICBM sites were at Defcon 4, but the country wasn't made aware of this, and remained on Defcon 2.  Indeed, we did seem on the eve of destruction.

Interestingly enough, Stone gives most of the credit to Khrushchev, not Kennedy, for defusing the situation, and notes a stray Soviet nuclear sub that had ventured through the Cuban "quarantine" and was rocked by depth charges.  He credits Vasili Arkhipov for having cautioned the commanding officer of the B-59 sub from unleashing the warheads on board, and saving the world from an almost certain nuclear war.  This sounds like one of those apocryphal stories the Soviets would invent to create a hero in the situation, but it has been picked up by numerous news sources and was the subject of a PBS production, The Man Who Saved the World.

Unfortunately, comments like these undermine what was otherwise a very good Episode 6.  Stone is not content to point to all the misconduct by the United States which led to the Cuban Missile Crisis, he feels it was Kennedy's blunders that almost unleashed a nuclear Armageddon, and once again the Soviets save the day, only for Khrushchev to suffer the wrath of Moscow hardliners and be ousted from office.  Much of the correspondence Stone cites seems to come from the former premier's memoirs, Khrushchev Remembers, which was translated and published in the US in 1970. 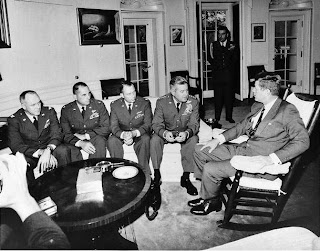 Ollie give the impression that Kennedy had fallen prey to the Joint Chiefs of Staff panic-mongering, and it was only in his last months of 1963 that Kennedy began to understand that the Communist threat was not so severe and was prepared to embark on a new road, formalized by the signing of a Partial Nuclear Test Ban Treaty in October, 1963.  It was this spirit of reconciliation which Stone feels inspired renewed worries among the conservative guard in the Democratic Party that Kennedy was too much a liberal to be leading the country during such a dangerous time.

Stone also points to interviews with Robert Kennedy and other members of JFK's cabinet who said Kennedy actually had a withdrawal plan for Vietnam set to begin when his re-election was assured.  Sadly, that day would never come and Stone sees Johnson's ascension to the presidency as the return of the old guard, much like Truman's rise in 1945.  The Gulf on Tonkin incident occurred in 1964, so we can only guess how Kennedy would have reacted to it.

Much of this is speculation.  It was only with the release of KGB files in the early 1990s that we learned that the Soviet Union didn't have as large a nuclear arsenal as many perceived in the late 50s and early 60s.  Whether the US military purposely beefed up the numbers to push Congress for more nuclear appropriations is debatable.  Certainly, the Soviets liked to project they had more weapons than they actually had as nuclear brinksmanship had become the order of the day.
Posted by James Ferguson at 11:54 AM