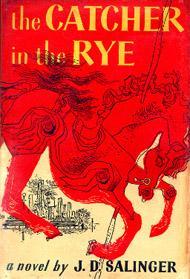 Seeing the anniversary of the banning of Ulysses, it brought to mind all the books that have been banned in America over the years for one reason or another.  The most common complaint is the impact books like The Catcher and the Rye would have on young impressionable minds.  Even the Harry Potter series won't be found on some high school library shelves, because of its so-called "demonic" content.

Then there is the presumed sensitivity to racial issues.  As a result, Disney has refused to reprint its classic film, The Song of the South, although numerous pirate copies are available through the Internet.  An interesting case of a self-imposed ban.

Why all the fuss?  In 1983, the Alabama State Textbook Committee rejected The Diary of Anne Frank because it was a "real downer."  The logging industry took exception to The Lorax, and sponsored a book called The Truax.  Discussing puberity is a taboo too, judging by the reaction to What's Happening to My Body?

Here's more banned books over the years.
Posted by James Ferguson at 12:11 PM