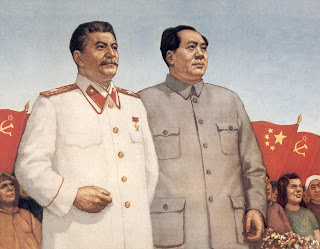 In Stone's Fourth Episode on the origins of the Cold War, he states that Churchill's "Iron Curtain" speech in Fulton, Missouri was a "quantum leap in belligerence toward the Soviet Union," although what Stone clips from that speech Churchill was spot on.  The Soviet Union did indeed "desire the fruits of war and the indefinite expansion of their power and doctrines."  Yet, Stone sees the Cold War having been started by the US and Great Britain in an effort to maintain English-speaking control of the world.

Once again we hear from Henry Wallace, as he spoke out in New York for a "middle way," which according to Stone "deeply embarrassed" the Truman administration.  Byrnes supposedly told Truman that either he or Wallace had to go.  After some deliberation, Truman "fired" Wallace.  Interesting, because in the previous episode Stone stated that Wallace resigned from the administration.  Whichever the case, Wallace was definitely a thorn in the side of Truman, and would serve his progressive interests better by going it alone.

Stone states that the US assumed global leadership with the support it gave Greek and Turkish autocratic governments in 1946-47, ultimately leading to the notorious Truman Doctrine, which greatly expanded the reach of the Monroe Doctrine.  After a heated Congressional debate, money poured into Greece and Turkey to support the government forces against the communist uprisings, which Stone clearly sees as heroic struggles, recalling the Spanish Civil War.

Ollie seems to take the tone of 1940 liberals who still had an idyllic view of Communism, noting the blacklisting that occurred in Hollywood and other attempts to ferret "communists" out of America.  He notes Reagan, Mayer and Disney's complicity in these efforts.  Surprised he didn't mention Elia Kazan as well.  Granted, this was very much a black mark in American history, but I think these efforts had more to do with breaking down the growing strength of the screen guilds, which threatened the control studio executives had over the film industry.  The "red peril" was simply a convenient excuse.  But, Stone prefers not to look very deeply into these labor disputes, rather he presents it all as part and parcel of a grand conspiracy scheme to make the Soviet Union into the "Evil Empire."

The techniques which Stone describes the CIA using to ensure pro-democratic governments in Western Europe were exactly the same as those the KGB used to ensure pro-communist governments in Eastern Europe.  Yet, Stone clearly portrays the US as the bully, using the Marshall Aid Plan to make a "satellite" of Germany, which upset Stalin, who feared the resurgence of this bitter enemy.  Stone portrays the suppression of Czechoslovakia as a direct reprisal to the Marshall Plan, which he sees as little more than a money laundering operation for oil companies. 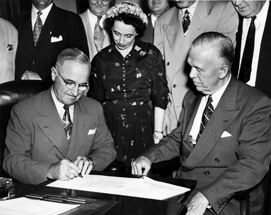 It seems that Stone will save the growing tensions in Asia and the Pacific rim for the subsequent episode, although he mentions the fall of China and North Korea to communism, greatly agitating Americans, and adding to the anti-communist hysteria.

Throughout, Stone presents Wallace as the champion of the common man, and in a rather amazing leap of imagination sees Wallace's candidacy as helping Truman stage his major upset in 1948, as Wallace forced Truman to make civil rights an issue, which brought more Democrats out of the fold on election day.  One can only speculate what turned the vote on election day, as Dewey seemed to have victory assured, yet lost by a substantial margin.  My guess is spotty political polls.

Wallace had warned against a Cold War, but Stone says Truman's "deliberate exaggeration of the communist threat both overseas and at home" and was now "signaling fear and aggression."  This Stone believes is what led to the Soviet Union's expansion into Eastern Europe, essentially creating a bulwark against potential American and British aggression through NATO.

Of course, this is the way the Soviet Union long portrayed its entrenchment in Eastern Europe.  Stalin and subsequent Soviet premiers always saw their actions as reactionary, as though it needed this line of "defense."  I suppose one can sympathize given the French and German invasions of the 19th and 20th centuries if one didn't live in Eastern Europe, but the USSR wanted nothing less than to recreate the Tsarist Russian boundaries, fudging a little bit to give it extra space.  Eastern Europe once again found itself caught in the middle.

One can certainly argue that had we established a policy of engagement with the Soviet Union there might have been more accommodation on both sides and not the divided Europe we saw come out of World War II.  Lurking in the subtext is a liberal "lost cause," the belief that had Wallace been the Vice-President instead of Truman, we would have had a radically different alternative history.  Ollie holds up his liberal hero as a power sharer, willing to accommodate the Soviet Union and other nations seemingly antithetical to US interests.  Yet, it appeared that Wallace suffered from a credibility gap, which might explain why he received only 3% of the vote. 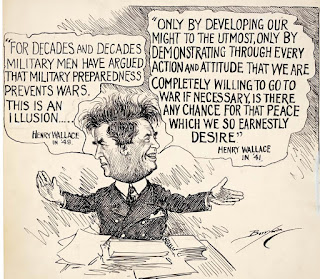 Posted by James Ferguson at 4:31 PM