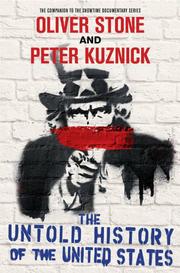 Apparently, Oliver Stone has assumed the mantel of Howard Zinn in creating a series for Showtime in which he presents his version of historical events.  The Examiner offers an amusing review, which is about what you would expect from Stone.  After all, he has given us his version of JFK's assination, Nixon, Salvador and the Vietnam war, safely in the realm of re-creations, so we could choose to accept or not accept his view.  But, now he presents his views as documentary.  There is a companion volume to this series, weighing in at nearly 800 pages and I well imagine chock full of images.  In an age when just about everyone considers himself an historian, I guess Ollie is just as entitled to present his view of events as Baba O'Reilly or Moonbase Newt.

The first three episodes were available as screenings to critics before the series premiered on Showtime in early November.  There was much initial feedback to the screenings.  The contentious speculation that Truman knew in advance of Japan's surrender before dropping atomic bombs on Hiroshimo and Nagasaki is made in Episode Three, simply titled The Bomb.