Crisis of a House Divided 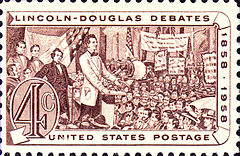 A book that keeps popping up on my screen each time I open amazon is Allen Guelzo's Lincoln and Douglas: The Debates That Defined America.  At one cent for a used hardback it is mighty tempting.  A little more through London-based amazon.  According to this NY Times review, Guelzo looks at the backstage politics of a very bitter Senate campaign, as well as the debates themselves.

I suppose why I keep returning to Lincoln is that it seems the House has never been so divided as before the Civil War, with the Republicans blocking any progressive legislation in Congress and states pushing socially divisive laws and challenging the federal government on everything from the Affordable Care Act to federal gun and marijuana laws.

Guelzo's book pretty much fell on the 50th anniversary of Harry Jaffa's seminal Crisis of a House Divided, which looks at the famous Debates within the context of a deeply divided union.  The earlier book has long been considered one of the key texts in understanding Lincoln.