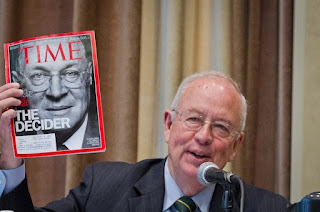 We saw Justice Roberts make the pivotal decision on "Obamacare" last year.  This year it is Justice Kennedy who proves to be the pivotal judge on two fateful decisions.  Kennedy is now the hero of the gay community, having been the deciding vote in overturning DOMA, but the goat among minority voters, who saw him vote to repeal a key section of the Voting Rights Act of 1965.  So, who is Anthony Kennedy, which Time magazine has dubbed "The Decider?"

If you have access to Time, which I don't, you can read its cover story.  Reading this story in Salon, it is easier to see how Kennedy may have reconciled his seemingly contradictory opinions, as he saw DOMA as "bare desire to harm a politically unpopular group."  He probably also saw Section 4 of the Voting Rights Act in the same light, as it explicitly singled out Southern states.

His decision on DOMA also seems to have opened up an ugly wound in the Supreme Court, which saw him very much at odds with Antonin Scalia, who wrote a scathing dissent opinion in which he took exception to Kennedy's views on the separation of federal and state powers.  This is an age old argument, and one conservatives cling to in defending some of the most nefarious state laws, notably the Jim Crow laws that existed in the Southern states for much of last century.

I think few could argue that DOMA wasn't a bad law, which Bill Clinton had no business signing into law, especially after campaigning so heavily in gay communities in 1992.  One could also argue that the Voting Rights Act needs to be revisited, but can we honestly expect a deeply divided Congress to do so.  It seems to me that Kennedy should have taken a more humanist approach to the Voting Rights Act, as he seemed to do on DOMA.