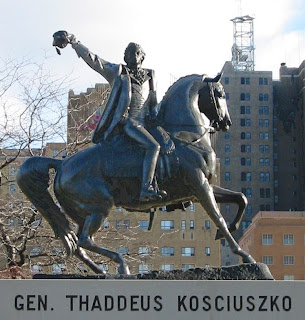 It's a great pleasure seeing so many folks from Russia, Poland, Lithuania and Romania looking in.  I've been running this blog from afar in my adopted home town of Vilnius.  Yet, my passion for American history and literature remains strong. I've also explored a great deal of Eastern European history in literature in the process, often finding interesting convergences.

One of my more recent personal discoveries was Tadeusz Kosciuszko, who fought in the American revolution and became great friends with Thomas Jefferson.  Ostensibly a military engineer, who worked under George Washington and later became a house guest of Jefferson.  Along the way he befriended Agrippa Hull.  The triad of Kosciuszko, Jefferson and Hull is the subject of Gary Nash's Friends of Liberty.

Kosciuzsko is claimed by at least three countries: Poland, Lithuania and Belarus.  He fought alongside Polish-Lithuanian commonwealth in its war with Russia during the late 18th century.  Eventually pardoned by the Tsar, he returned to the United States.  You can find memorials in many places, including Krakow, Detroit and West Point.  The one pictured above is in Detroit, looking a little bit like Pushkin's Bronze Horseman.
Posted by James Ferguson at 4:43 PM