A Writer in Waiting 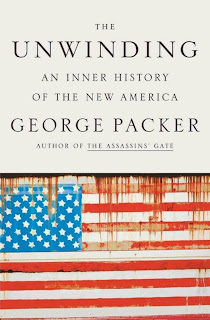 I've long been interested in George Packer, not exactly in a positive way, but not negative either.  That was the way I felt about his first book The Village in Waiting, which my sister sent me to try to spur me to write about my own experiences in Lesotho.  His were about another small African country, Togo, at the opposite end of the continent.

He seemed to feel disillusioned after his Peace Corps experience, and it seems that feeling has carried with him in his writing.  For him America appears in decay, like the international programs it continues to sponsor.  Of course, I could have written about all those rusting hulks of farm machinery USAID had supplied to Lesotho, that didn't work in the mountainous terrain, where terrace farming was practiced.  Many of these old tractors had been stripped down and parts used for other machinery.  But, I wasn't able to find the words at the time and still struggle to find the right words.

Apparently, not George Packer, who has written what this NY Times critics is hailing as "something close to a masterpiece."  Mr. Packer has written about The Unwinding of America, a country literally coming apart like one of those jalopies from a Laurel and Hardy sketch.   The only problem, it seems, is that he finds no humor in it, which is what I found odd about his book on Togo as well.  Surely, we can have a little fun with this theme, not take it so darkly serious.  After all, he was writing about a leader, not much unlike Reagan, who seemed to be impervious to harm.  Literally, in the case of strongman Eyadema, who as Packer described, even survived a helicopter crash.

Packer also seems to have a thing for machinery.  I suppose it is a useful metaphor given the industrial giant we once were and still are in terms of military.  But, we no longer seem quite like the Titan we were back in the 50s.  The author takes 1960 (the year he was born) as the turning point. For those who have grown up after 1960 our image of America is largely one of decay, from collapsed barns to rusting metal truss bridges to pockmarked roads to auto graveyards spread throughout the country.  I guess being a Generation X'er means being born with a sense of disillusionment, especially after that fatal shot in Dallas 50 years ago.

It should make for an interesting book.  I'm game.  Packer not only looks to the past but at the current situation and the disillusionment he feels with Obama and his limp handshake.  He seems to hold out some hope in Congressional leaders like Elizabeth Warren, but his view appears to be mostly a dispirited one.  We failed to have our "Black Kennedy."