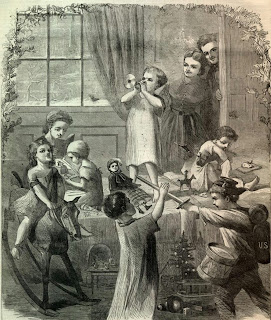 One of the many things I found fascinating in John Barry's book on Roger Williams is that the Puritans in America suppressed the celebration of Christmas, considering it too closely associated with paganism and idolatory.  I think anti-Catholic bias figured in as well.  It wasn't until the 19th century that New England states began to relax these laws.  Christmas became a federal holiday in 1870, largely for commercial reasons, not religious ones.  Yet, we see all this anxiety over Christmas being marginalized in today's society.

There is no scriptural record of Jesus' birth.  Dates varied but the Romans decided to link his birth to December 25 in 336 AD.  Apparently, there was no surviving birth record even though the Romans kept birth records for tax purposes.  Most scholars feel that by linking Jesus' birth to the winter solstice, missionaries would have an easier time converting pagans, who already honored this day in ceremonies throughout Europe.

With the breakaway Lutherans and other Christian sects, many conservative Christians chose not to celebrate Christmas, and this attitude came to America with the Puritans.  These new Protestant religions read the Bible explicitly.  Easter was seen as the date of prime importance, although this date is hard to fix as well and came to fall conveniently near Vernal Equinox, also long celebrated by pagans.

Still, most Biblical scholars search for astronomical phenomena in December to explain the guiding light that led the wise men to Bethlehem.  History Channel was offering some cosmological insight into the matter the other night.  The arrival of the "Three Kings" is celebrated on January 6, with the ceremonial number of 12 days being the length of their journey, although it probably took them much longer given the arduous terrain and presumed distance of their journey.

It seems that are new found sense of Christmas is a product of the Second Great Awakening, a religious revival that took place in the mid-19th century, out of which sprung Mormonism and a wide variety of other evangelical religions that have come to dominate the Protestant movement in America.  If Joseph Smith could imagine talking to Jesus in upstate New York, why couldn't anyone else?   The itinerant preacher was born, spreading the word from town to town, and gathering converts along the way.

I think the plight of the Mormons and other evangelical religions helps explain this sense of "victimhood" many Evangelicals and Fundamentalists feel.  Their nascent religions were seen as being on the fringe and often in defiance to the more orthodox forms of Christianity.  They had to seek out new lands and new pastures to build their "heavens" on earth.  I suppose in this way they felt they were a lot like Jesus trying to gather a following around him, so his life became every bit as important as his death in their minds.

But, what has always struck me as odd is how these very strict interpretations of the Bible so often dwell on Old Testament themes, especially the idea of an angry and vengeful God that will smite anyone who defies his will.  Again, I think this has a lot to do with the persecution many of these Evangelicals felt and that there had to be some form of retribution for those who would diminish their faith.

As a result, many Evangelicals and Fundamentalists appear to have a pretty big chip on their shoulders, and get quite agitated around Christmastime.  They insist on their nativity scenes and their "Christmas trees" even though they would have found themselves breaking the laws of early Puritan America.  Ironic, especially when you think how many times John Winthrop's "shining city upon a hill," has been evoked.

Posted by James Ferguson at 6:58 PM