Fort Ross and the Russia-American Company 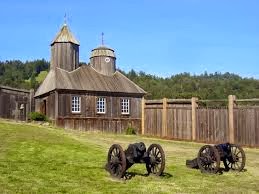 I want to say thank you for all this interest from Russia in our blog.  As a tip of the hat, I couldn't resist posting a little bit about Fort Ross in Northern California. This was apparently the most eastward expansion of the Russian-American Company, chartered by Tsar Paul I in the late 18th century.  The Spanish apparently got very worried and Father Junipero Serra established missions as far north as present-day San Franciso in an effort to stake out the domain of the Spanish empire.

This was just a few short years before Lewis and Clark's "Journey of Discovery," so apparently the fledgling United States was a bit worried too, although the extent of its landholdings at the time only extended as far as Montana with the acquisition of the Louisiana Purchase in 1803.  But, the US already considered the West Coast a part of its Manifest Destiny and it would be only a matter of decades before California and the Oregon Territory were acquired in the wake of the Mexican War. 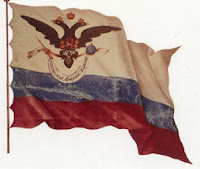 I often wonder what it would have been like if the European powers had been able to maintain a foothold in the American continent.  But, wars split Europe and made it relatively easy for the growing United States to conquer these far-flung territories.  Alex de Toqueville recognized both the growing power of the United States and that of Russia in the early 19th century.  The United States purchased Alaska from Russia in 1867, completing it's present day territorial size.

For the most part the relationship between the United States and Russia generally was good, but the negotiations to end the Russo-Japanese War created some bitter feelings, largely over the disputed Sakhalin Island.  Hard to say how much of a role Teddy Roosevelt actually played in these negotiations other than to initially broker them, at Japan's request, but he was the first American president to win the Nobel Peace Prize as a result of the settlement.

Tsarist Russia was beginning to unravel at the time, and it wouldn't be long until the country was in deep turmoil.  The collapse of Russia and the creation of the Soviet Union led to competing political theories on foreign diplomacy between Wilson and Lenin, which Arno Mayer provided the first extensive history in 1959.

Open to suggestions for other books that have dealt with Russian-American relations over the years.  Please feel free to contribute.
Posted by James Ferguson at 11:52 AM