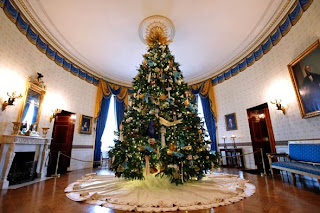 It seems that every year we go through the same debate as to whether it is a holiday tree or Christmas tree. Rhode Island was apparently "outraged" that Gov. Lincoln Chaffee had the temerity to call it a "holiday tree," but this is just the tip of the iceberg.  A Ben Stein meme is finding its way around facebook (not the first year) in which he reportedly said the White House is calling the Christmas tree a Holiday tree for the first time.

As you can see, the Obamas still refer to it as the National Christmas Tree with Michelle reading the Christmas classic, The Night Before Christmas, to the audience.  Of course, the White House also pays respect to Ramadan and Hanukkah as well, as well as makes a tribute to Kwanzaa each year.

So why all the fuss?  It's not like the Christmas tree is an inherent part of Christianity.  The idea of worshiping trees is traditionally pagan and this time of year would have been in conjunction with the Festival of Light, still celebrated in many parts of the world.  The first recorded public "Christmas" tree was in the 16th century in the town square of Ryga.  Such celebrations didn't come to America until the 19th century and the first Christmas tree was presented in the White House by Benjamin Harrison in 1889.

In fact, there have been several years without a Christmas tree in the White House.  Teddy Roosevelt apparently being the biggest humbug, not putting up a tree three times.  He reportedly chalked it up to procrastination. Since 1922 it has been an annual affair, growing in stature each year to the point it has become tantamount with Christmas itself.

Of course, many Conservatives refuse to accept the Obamas as Christian, despite their dutiful attendance of church for many years, and the poignancy they give to Christmas in the White House each year.  The only mishap this time around was when a little girl was knocked over by the Obama's new dog, Sunny, at an earlier White House ceremony for military families. Of course, this was quickly picked up on the Internet and became subject to all sorts of speculation.

It seems the meme comes in part from Ben Stein's Confessions for the Holidays, which first appeared in 2005, and the bit about the "Holiday Tree" began to appear in 2009, with no link between the two.   Too bad so many persons accept these stories without looking at the White House page to see the real story.
Posted by James Ferguson at 8:55 AM