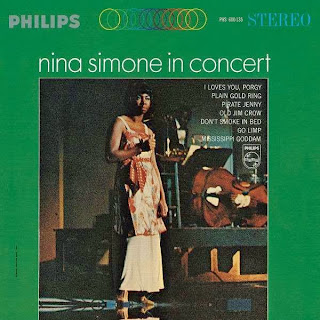 Nina Simone's beauty came from within.  She sang from the depth of her heart, with many of her songs and interpretations of classic songs, like Pirate Jenny from Kurt Weill's Three-Penny Opera, becoming iconic of the Civil Rights Movement.  It really is hard to imagine anyone playing her in film, but I see the beautiful young Zoe Saldana has been cast in the role of an upcoming biopic.

Needless to say this has caused quite a stir. Mary J. Blige was first cast in the role, which also ruffled a few feathers.  My suggestion would be anyone of these four women because there is absolutely no question anyone of them can sing Simone's signature songs, and if beauty is what you are looking for there are few women more beautiful than Lizz Wright.  Instead, we most likely will get another film along the lines of Ray that meticulously chronicles the life of the legendary artist, who left America to make a better life for herself in France.

Probably her greatest performance was recorded at Carnegie Hall in 1964.  It centered on the Civil Rights Movement, offering stirring interpretations of I Loves You Porgy, Plain Gold Ring and Pirate Jenny, as well as her own great songs Old Jim Crow, Go Limp and the show-stopping Mississippi Goddam.

One can appreciate the effort to make Nina Simone accessible to a new generation, but her songs have already been remixed and re-imagined into House music, and made popular in night clubs.  The movie will no doubt attempt to put her in proper perspective, but seems to capture her more as a sexy chanteuse than the powerful voice that she was.
Posted by James Ferguson at 1:15 PM