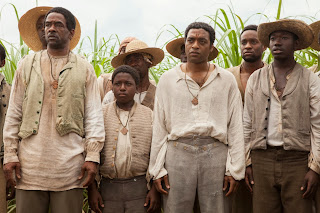 12 Years a Slave should dismiss any more Southern antebellum fantasies.  I really appreciated the way Steve McQueen looked at slavery as a form of Totalitarianism, rather than extolling the nobility in his oppressed characters.  Michael Fassbender was utterly ruthless as Edwin Epps, controlling his work force as a commander would a prison camp in World War II.

I assume persons have seen the movie or know of Solomon Northup's account, so I will indulge in a few details from the movie.  Solomon (Chiwetel Ejiofor) soon learned after being duped and sold into slavery that if he wanted to survive he had to keep his head down, and that meant assuming his new identity as Platt, as there would be no one to help him.

The strong English accents may throw some persons off, but it gives the film an air of authenticity, as do the plaintive folk songs of the era.  The characters speak as of their time, which I felt was very important to the film.  There is no good or bad.  Each has his rationalization defending his position.

The first plantation owner Platt is sold to is a very pious and seemingly fair man, but is unwilling to accept that Platt is anything other than a nigger, even when Platt suggests clearing the swamp to provide easier transportation for the logs Ford uses in his mill.  It is Platt's confrontation with the overseer Tibeats that dooms him on the plantation and Ford is left with no other "choice" but to sell him down the river to Epps, also a very pious man but utterly twisted in his self righteous rhetoric. 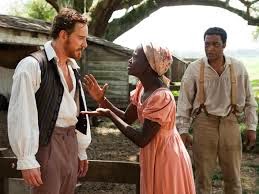 The relationship that develops between Platt and Epps is spellbinding and forms the heart of the movie. It is especially strong when Patsey comes between them.  The young slave is extremely well played by Lupita Nyong'o, and the scene where she steals away from the plantation to get a bar of soap is absolutely riveting.

Brad Pitt, who helped finance the movie, has a small role as a journeyman carpenter, presumably Quaker judging by the conversations he has with Epps and Platt, who eventually helps Platt gain his freedom.  But, even here McQueen downplays the heroism of Pitt's character, not allowing this film to delve into the bathos of Schindler's List.

Unlike Spielberg, who has delved into the issue of slavery more than once, McQueen  isn't seeking nobility in his characters or turning this into a morality tale.  McQueen wants us to feel his characters' plights, and in particular Solomon's plight.  He keeps the camera close, very close to the action.  You feel like you are right there on the plantation, not viewing it from the theater seat.  McQueen makes you wince with each crack of the whip on poor Patsey's back. 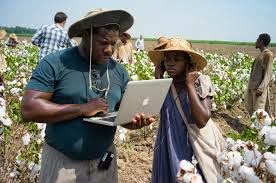 This is the movie we have long needed to dispel the mythmaking we so often see regarding the antebellum South.  McQueen has Caribbean roots.  I believe his parents came from Grenada.  The subject was particularly close to him and he is able to give it the same visceral feeling he has shown in his other movies, notably Hunger, which told the story of the 1981 Irish Hunger Strike in Maze Prison through the eyes of Bobby Sands (also played by Fassbender).
Posted by James Ferguson at 10:27 AM