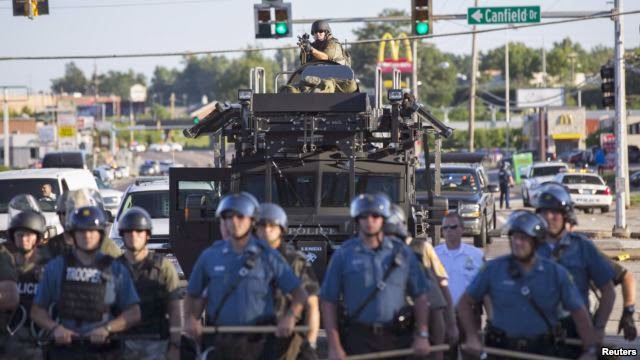 The scariest part of the ongoing Ferguson riots is the degree to which the police department is outfitted with military-grade equipment to deal with the crisis.  Rather than attempt to calm residents by showing some empathy for the situation, the Ferguson Police Department has gone into full assault mode, quelling the riots by force, often excessive, which has resulted in more injuries and arrests in the aftermath of the shooting of Michael Brown.

Since 1990, police departments across the country have been quietly amassing a sizable arsenal of military-grade equipment thanks to the National Defense Authorization Act that allows them to buy surplus military equipment at greatly discounted prices.  For instance, The Police Department of Watertown, Connecticut acquired a mine-resistant, ambush-protected (MRAP) vehicle for less than $3000, which cost the military over $730,000.  The 1033 Program was initially aimed at combating drug activities, which often saw drug gangs with high-powered weapons.  Such procurements are not a matter of public record so it is hard to gauge just how much military ordnance local and state police departments have acquired over the years, but the ACLU estimates about $4 billion worth of military equipment has exchanged hands.  John Oliver sums up the situation well.

An MRAP vehicle was spotted in Ferguson, although the police department doesn't have one registered in its possession..  Events have spiraled out of control with Gov. Jay Nixon issuing a curfew and calling in the National Guard.  Of course, it doesn't help when you have incendiary figures like Rev. Al Sharpton on hand, but obviously this is a time to promote calm, not more unrest.

Accounts of the incident vary.  As a result, Eric Holder has called a federal investigation into the matter.  Police responded to a robbery that took place at a convenience store, and had stopped 18-year-old Michael Brown on the street.  According to the policeman that fired the fatal shot, Brown refused to yield to warning shots and was subsequently shot in the head.  Afterward, it was revealed that Brown was unarmed, but his bulky frame was apparently enough of a threat to justify the shooting.  It seems the St. Louis County Police Department was unable to budget cameras for its' police officers, so we will never know what actually transpired. 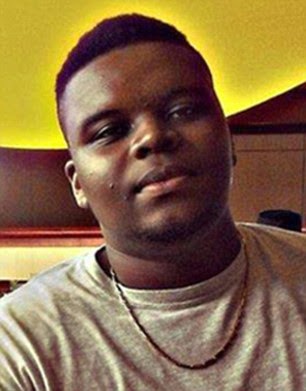 While friends vouch for Brown's gentle demeanor, the police and the conservative media have gone out of their way to paint Brown as a two-bit thug, possibly involved with a notorious drug gang.  Shades of Trayvon Martin, as this incident appears racially charged as well.  Whoever you choose to defend, it certainly should give anyone pause the degree to which these police departments are now armed and potentially very dangerous in what seemed a very minor infraction.  Brown apparently had stolen a box of cigars.

I understand that when a police officer encounters a suspect, he doesn't know the person's history and so he has the necessity to be on his guard, but two shots to the head indicates that these officers were shooting to kill.  It seems that with the increase in firepower, so to has come a change in attitude, as if these troubled streets are potential urban war zones.  In fact, many police departments are being trained in urban combat.  This is exactly what Chris Kyle's company, Craft International, does.

How far this goes is anyone's guess, as police departments are scrambling for military surplus.  Even Walton Country, where I grew up in Florida, now has an MRAP vehicle to patrol the beaches.  This is not a county known for drug trafficking or a high crime rate, although the writer of the article saw fit to defend the acquisition.  Sadly, many seem to be accepting this increasingly militarized society we live in.  Obviously, the folks of Ferguson, Missouri, are not.