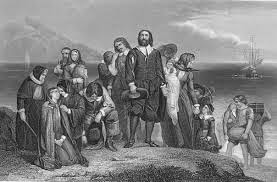 History has always been a sensitive subject, but no more so than it is today as conservatives take exception to the "negative" framework being offered by the College Board for Advanced Placement United States History in high schools across the country.  The Republican National Committee issued its challenge to the revised framework, based on an analysis by Larry Krieger, a deeply concerned retired American history teacher.  The RNC apparently wants Congress to block funding for the AP history program until the College Board addresses its concerns.

Krieger's lengthy analysis revolves largely on the scope of the program, which he feels doesn't stress the role the United States played in promoting religious tolerance and democratic institutions.  He notes that there is virtually no mention of this during the Colonial era (1607-1754).  Instead, there is too much focus on the Pueblo Revolt and other "Indian Wars" and emphasis on British cultural superiority, which apparently he doesn't consider that relevant.

He cites Puritan John Winthrop's sermon aboard the Arabella, where he compared their future settlement to a "city upon a hill" that future generations would look to as a model of government, but fails to note that Roger Williams was expelled from this anointed kingdom and forced to find refuge among the Indians in present day Rhode Island, or the executions of those that didn't comply with the harsh religious doctrine of the Massachusetts Bay Colony.  It seems Professor Krieger might want to get off his hill and read a little more about those "religious tolerant" times.

The new framework may have its shortcomings, but at least it attempts to honestly address the past, not view it through rose-tinted glasses, which appears to be the case with the RNC.  It is not a curriculum, but rather a set of guidelines for effectively teaching AP American history at the high school level so that students will be prepared for college.  Teachers are expected to meet key objectives. They are not being forced to cover prescribed topics.

This seems lost on Krieger and the various groups who are attacking the College Board.  Among these groups is Concerned Women of America, on whose panel Krieger sat, which feels that Biblical principles have all but been left out of the curriculum, er I mean framework.  They view the AP framework as a left-wing attack on their values.

Into this highly charged environment, David Coleman wrote an open letter, which Michael Hiltzik scoffed as "soft-soaping," saying it would do little to subdue the angry conservative mob who wants nothing less than American history taught its way.  Larry Krieger cherry picked from the 150-page document to set up straw men for his arguments, much like David Barton has done in his faux history books, knowing full well that his readers won't take the time to read the actual document.  Nevertheless, Coleman has tried to mollify the conservative critics by releasing sample tests to show that the Founding Fathers and other key aspects of our history haven't been omitted.

However, it is doubtful that this will satisfy the thundering herd that has jumped on this issue and widely dispersed it through its conservative blogosphere.  It raises the question once again, Who Owns History?