Tan is the New Black 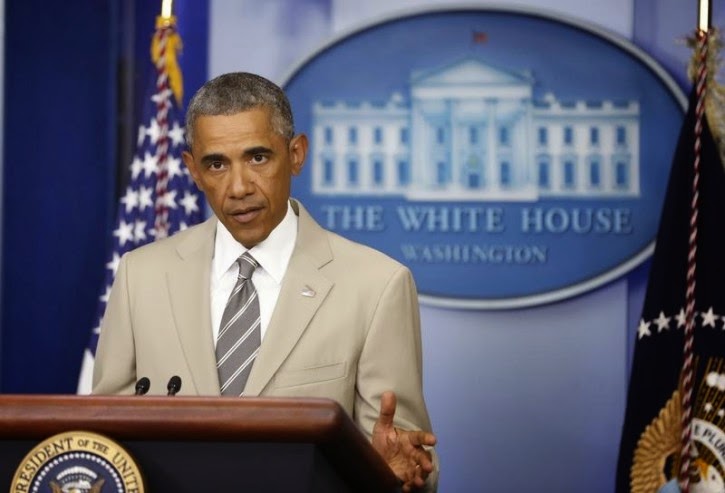 Sorry, I couldn't resist.  Seems everyone is talking about Barry's new tan suit and looking for a clever way to title there opinions.  This appears to be the age we live in when an unexpected choice of clothes creates more stir than what is going on in the world, notable the crisis in Ukraine, which took a nasty new turn, which President Obama responded to, but the glare of his new tan suit was simply too much for reporters to digest.

August is usually a difficult month, with Congress out on holiday (again) and focus on the many Congressional and gubernatorial races around the country.  Obama didn't exactly distinguish himself by saying his administration doesn't have a strategy yet on Syria.  In fact, he seemed pretty low key about what's going on in the world, but I imagine his administration has a pretty good sense of events.

Unfortunately, this administration has been unable to communicate that effectively, leading many critics to think that he has put his administration on hold until after the midterm elections play out.  My impression is that he has opted for Eisenhower's "Hidden Hand" approach, preferring to work behind the scenes with world leaders, rather than out front like many Americans would like him to do.  I see I'm not the only one who picked up on this.  Eisenhower was praised for this approach (in retrospect) but Obama has to endure the many criticisms.

Basically, it is a policy of containment not much unlike that we saw during the Nixon years (who had served Eisenhower before), rather than trying to dramatically effect or inflame situations.  This is certainly the approach to Ukraine, where any attempts to supply the government with arms, would no doubt lead to major escalation in violence.  Of course, this frustrates Ukrainians, who see Russia supplying the insurgents in Donetsk, with the Ukrainian military losing ground it had previously gained in taking back this breakaway province.

Syria and Iraq are similar situations, but the Obama administration seems more free to give military assistance, even if it hasn't unveiled a policy as yet.  In Syria, the situation is reversed with Russia providing military support to the Assad government, which the Kremlin claims it was contracted to do, and the US providing aid to the insurgents, although now it finds ISIS part of the insurgency, which it hadn't bargained for.

I suppose a more somber gray or navy suit, which he normally wears, would have been in order given the gravity of the situation.  However, what his press conference alluded to most was the lack of communication between the White House and Congress, and that now that he is back in town we may see more executive action with Congress on break.  Something, Congressmen have pointedly demanded he not take with threat of another government shutdown.  So, what's a President to do?
Posted by James Ferguson at 12:28 PM