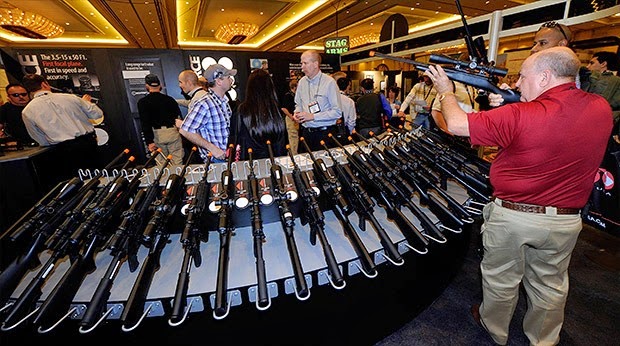 I guess there's a Humboldt Peak for guns as there is for oil.  Not surprising given the estimated 300 million firearms in circulation in the United States, especially considering the durability of guns to last a lifetime.  The only real worry is ammunition.

Sales have dropped sharply in recent months, as there no longer seems to be an impending worry of zombies or gun controls.  Not even the recent USSC decision on "straw purchases" created much panic among gun owners, as they figured it had nothing to do with them.  This is a major concern for suppliers who have gone public like Smith & Wesson, which has seen its stocks plummet.

It seems that the greatest impetus for the spike in gun sales was the election of Obama in 2008.  There was widespread fear that he and a Democratic Congress would initiate sweeping federal gun controls.  That never materialized, but in 2012 the President made a big show of issuing executive orders in the wake of the Sandy Hook massacre that had gun enthusiasts cleaning out the shelves of Walmart and other retail shops nationwide.

These executive orders had very little bite, however, and the panic soon subsided.  Nevertheless, several states adopted open carry laws in the aftermath of Obama's executive decision, and some states even sought to nullify federal gun laws, like Missouri, only to be vetoed by the governor in this particular case.

Gun shows are still very popular and guns continue to be distributed second hand, often without any record of purchases, so that the gun only remains registered to the original purchaser.  Some states have sought to record all purchases, the same as you would with cars, but that has met with a lot of resistance from gun advocacy groups, notably the NRA.

So where do gun manufacturers go from here?  I guess they will have to seek markets abroad, presumably third world countries with few regulations, as there isn't a huge demand for guns in Europe or Canada.  Of course, these firearm companies can diversify their interests, as the tobacco companies have done, getting into clothing lines and outdoor gear.  Smith & Wesson currently has a rather sparse selection.  Time to get creative!
Posted by James Ferguson at 2:05 PM