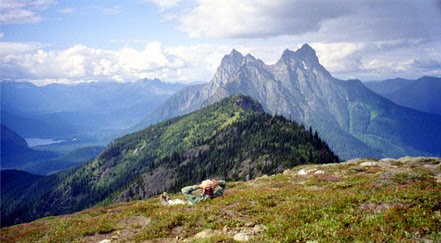 There are more famous peaks in Washington but the one that drew me back to my home state in 2004 was Desolation Peak.  It's not too far north of Seattle.  You take Highway 20 into the North Cascades and you will find the trail head.  After leaving Japhy Ryder (aka Gary Snyder) behind in Berkeley, Kerouac hitched the train up to Seattle and took a job as a lookout at Desolation Peak.  I had outfitted myself at REI and made the trek to the US Forest Service fire lookout, which had become a mecca of sorts for Kerouac fans.  He spent 9 weeks there in the summer of '56 commuting with nature in an attempt to maintain the state of ecstasy he felt after his time with Snyder, or so the story goes.  It had been Snyder who recommended the post to him.

I had long been drawn to such lookouts.  This one sat on a ridge.  In Florida they were raised up on metal scaffolding.  Desolation Angels was penned later, and wasn't published until 1965, after the success of On The Road.  Apparently, he didn't do much writing at the time.  The novel more or less completes his Road Trilogy with Dharma Bums (my favorite) in between, as one segues into the other in his free-flow narrative.

The Pacific Northwest had attracted many writers and artists over the years.  Seattle has had its homegrown music scene since the 50s with its very own style of Rhythm and Blues.  While everyone knows Hendrix and Nirvana came from Seattle, a lot of folks probably don't know that Heart started out in Seattle or that one of the pioneers of rap, Sir Mix-a-Lot, started out in the Capitol Hill District.  Quincy Jones formed a college band at Seattle University and still makes his home there.  Sadly, Hendrix's boyhood home could not be saved after numerous efforts. 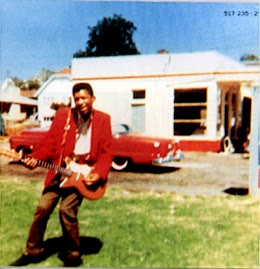 All this lends to the hip atmosphere of the Emerald City that looked anything other than "emerald" when it was first founded in 1851, which the initial settlers called New York.  Later, it was named in honor of Chief Sealth, whom the settlers called Seattle.  The Duwamish people had befriended the early settlers, but they were not treated as kindly in return, forced onto a reservation that resulted in the Battle of Seattle in 1856.  Later, Chief Sealth became a favorite of environmental activists, as a result of this speech attributed to him.  In 1908, a bronze statue was erected in his honor in Pioneer Square.

If you take the Underground Tour, you will notice old flush toilets raised up on wood platforms.  The city had grown rapidly but much of the port area was below water level.  This was the only way to avoid a foul backup from the sewer lines.  Seattle had become an active port town, the last stop before heading North to Alaska.  Eventually, the port area was raised but it is still a bit of a grimy place. 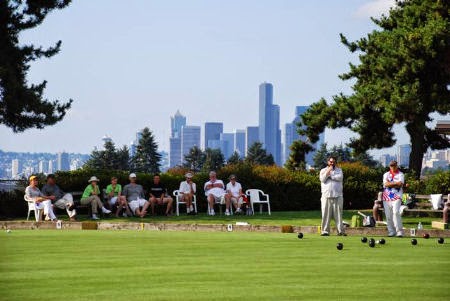 I spent my newborn years in a Sears pre-fabricated bungalow on Green Lake, which my grandparents had bought in the 1930s.  My grandfather dug a basement under it, where my grandmother stored her preserves.  Woodland Park is nearby, where you can still lawn ball, but my grandmother took up dancing after my grandfather died.

My great grandfather had established a steamship company in the 1880s that served Alaska.  It was one of his many ventures that eventually folded, only to be revived by someone else and made into a success.  Today you can take cruise lines to Alaska, taking in all the rugged beauty along the way, or a ketch like Jonathan Raban did in Passage to Juneau.

For a region mapped in 1805 when Lewis and Clark followed the Columbia River to its end, it took many years to be organized as a territory in 1853.  You can visit Fort Clatsop, which marked the end of the famous expedition.  Washington was originally part of the Oregon Territory, and was going to be called Columbia, but Rep. Richard Stanton felt this would be too easily confused with the nation's capital.  One of the many ironies that plague the state to this day. 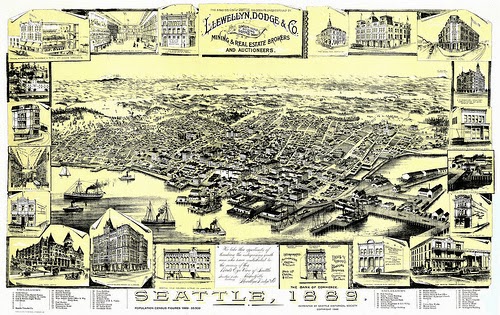 Washington didn't gain statehood until 1889 thanks to an Enabling Act that brought in four new states in the month of November, Washington being the last. This was also the year of the great fire, which ravaged Seattle.   Among the many contentious issues at the constitutional convention in Olympia was women's suffrage.  The territorial government had allowed women to vote, but the territorial supreme court had overturned this on two previous occasions.  Women would regain this right in 1910.

That early liberalism is still apparent on the West side of the Cascades, but cross over into the rain shadow on the East and it is a whole different story.  This is plains country, dominated by ardently conservative rural voters.  You can follow the Columbia River, which had inspired Woodie Guthrie to write one of his signature folk songs in 1941.  Roll On Columbia was part of the Columbia River Ballads, commissioned by the Bonneville Power Administration to promote hydroelectricity, which is one of the major sources of Washington electricity.  The largest city in the East is Spokane, which hosted the first environmental themed World's Fair in 1974, better known as Expo '74.  This helped transform the city, not to mention put it on the world map. 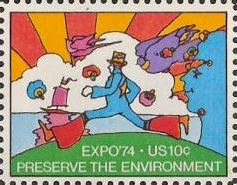 Seattle had hosted the World's Fair in 1962, and its Space Needle still dominates the skyline.  There is now an EMP Museum devoted to music, science fiction and pop culture at the foot of the Needle, which the monorail runs through.  There have been various initiatives to expand this monorail over the years, but the cost is prohibitive, and it is easy enough getting around the city by bus.

Seattle today is a fusion of cultures that almost seamlessly come together.  This wasn't the case during WWII, which David Guterson describes in Snow Falling on Cedars, when 800 Japanese residents were forced to leave their homes on San Piedro Island in Puget Sound, and shipped off to a California internment camp.  It wasn't until 1988 that a formal apology and reparations were made.

Washington created quite a buzz with a marijuana initiative, which was approved in December 2012, but some towns continue to fight the initiative.  This ongoing battle could end up in the Supreme Court.

I suppose with all those wet cold days it is not a big surprise that coffee is quite popular.  Those who bought stock in Starbucks when in first went public in 1992 no doubt enjoy their dividends, but there are far better coffeehouses, like Caffe D'arte, around the city.  As one employee once told me, Starbucks doesn't sell coffee, it sells milk.  Most coffeehouses give you two shots of espressos with a tall latte, whereas you have to pay for the second at Starbucks.

Seattle also became the home of Microsoft, Amazon and Adobe, resulting in a silicon boom of its own.  Paul Allen could probably run for mayor and win given the success of the Seahawks, a team he bought after he retired from Microsoft.  It was during their run for the Super Bowl, dubbed the Marijuana Bowl by some, that many of Seattle's famous faces came out in support of the team, including this amusing take by Rainn Wilson. 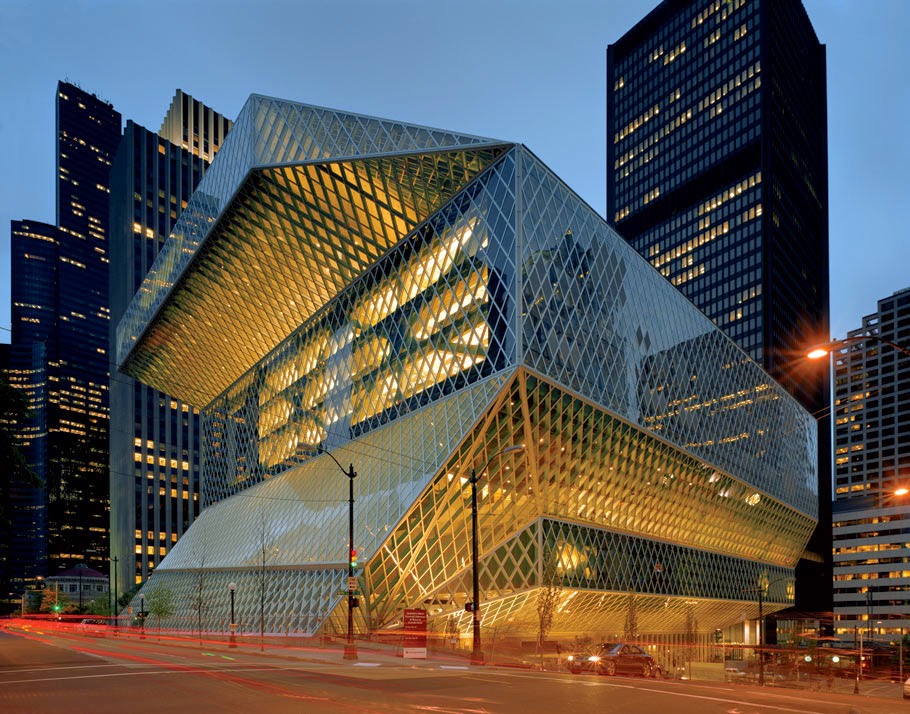 However,  it is the city's love for books that stands out in mind.  There are an astonishing number of independent bookstores, like Left Bank Books by Pike Street Market, spread throughout the city and its boroughs; as well as a beautiful library system, anchored by the stunning main center designed by Rem Koolhaus.  It is also a city that has embraced environmentally sensitive architecture as seen in the Ballard Library and Neighborhood Service Center designed by Bohlin Cywinski Jackson.  If feeling nostalgic, you can always check out the Green Lake Library.

Another great pleasure of living in Seattle is the easy access to so many outdoor activities, especially the ferry service which takes you to the many islands in the Puget Sound.  On a good day you can even see Orca breaching off the bow.   At Tellicum Village on Blake Island you can enjoy roasted salmon and watch a native dance in a reconstructed long house, with echos of the distant past.

At the end of my extended stay, I drove with my godmother up the Sound to Whidbey Island, where I had scattered my mother's ashes at Rosario Beach five years before.  She and my mother had come here as children.  This is how they would have remembered it. 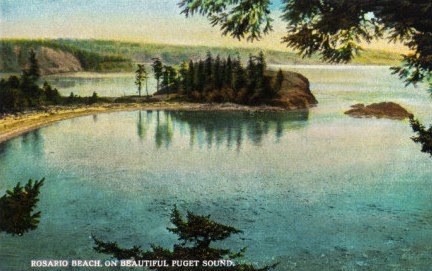