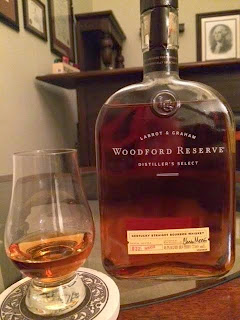 Nothing I enjoy more than a good bourbon.  I stumbled across this bottle the other day in the vynoteka, as they call liquor stores here in Lithuania, and have to say I was very impressed.  Woodford Reserve had the full body taste of a Kentucky whiskey but was smooth as silk.  It was so good that the bottle was the first to go at my wife's birthday celebration, and I had to go back the next day and buy another bottle for myself.

The distillery don't go much into its history on its website, but it has been around for quite a while.  I guess they feel that the whiskey speaks for itself.  I did find some more information on the Kentucky Bourbon Trail website, which noted that Woodford Reserve dates back to 1797 when Elijah Pepper began distilling in Woodford County, and that the distillery is a national landmark, as well it should be.  Not surprised that it is the official bourbon of the Kentucky Derby, which was run last weekend.

I imagine it makes for a fine mint julep, but I like my whiskey neat, swirling it around in a snifter so that I can get the full aroma.  Bourbons have such a rich intoxicating smell, but can taste a bit harsh if not blended with rye.  By law, a Bourbon has to be at least 51 per cent corn. The rest is up to the distiller.  It is the corn that gives a sweetness to the smell, but it is not very smooth to the taste.

The minimum age is a short three months, but the longer you let the bourbon age the more the flavors come together, including the oak from the fresh cut barrels.  But, you don't see age distinctions as you do on Scottish whiskeys.  For the record Woodford Reserve is aged an average of 7.3 years.

With the Internet today there isn't much need for guidebooks or history books on the subject, but there is a new title, Bourbon Empire, which has received favorable reviews.  Bourbon was in danger a few decades back as Americans had become enamored with Single Malts and other fine Scottish and Irish whiskeys, but since then a revival has taken place and Bourbon is doing well with a great number of small batch distillers springing up all over Kentucky and Tennessee, as in the days of old.  Reid Mitenbuler tries to guide you along the Bourbon Trail so that you won't get suckered in by a fancy bottle, as all too often marketing tricks trump the quality of the whiskey.

However, I can say without reservation that you can't go wrong with Woodford Reserve, and if the distillery would like to send me a select bottle of Double Oaked for this glowing review I would greatly appreciate it.
Posted by James Ferguson at 10:39 AM