The Curious Campaign of Rand Paul 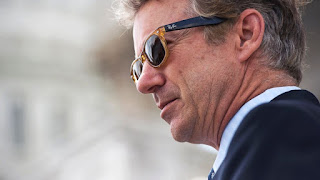 Rand Paul is the most intriguing candidate in the race.  While the other Republican candidates try to jockey for the lead position in the religious conservative straw polls, Rand has staked out the middle ground, trying to reach out to a much broader segment of the population with a message most clear-headed individuals can relate to -- personal rights.  Whether he is genuine in his stand against the prying hand of the Patriot Act or not, it was refreshing to finally see a Congressperson stand up against it, mounting another marathon filibuster that kept disgruntled Senators in session long after they were ready to leave for the Memorial Day weekend.  Not that many stayed around to hear him through.

For the past two years, Rand has been busy touring college campuses, Liberty University excluded.  He has become quite popular among the youth in this country with his message of individual freedom.  He has made the Patriot Act his pet issue, and given the amount of time students spend on the Internet this is a big issue for them.  No amount of spyware, adblocks and other anti-infiltrating software is going to stop the federal government from snooping in your on-line accounts, especially when it hides its spyware everywhere.

What makes Rand Paul appealing is not only that he has taken up this issue, but that he speaks to our level of intelligence.  In sustaining his filibuster, he read passages from Montesquieu, George Orwell, Thomas Paine and Milton Friedman, not Dr. Seuss' Green Eggs and Ham, as Ted Cruz did when he staged his faux filibuster against an appropriations bill in 2013.  This leads one to think that Rand is serious about the issue, even if his filibuster was not a true filibuster either.

Many are arguing that this defiant stand against the Patriot Act will hurt Rand, as it cuts against the grain of security-minded conservatives who seem more than willing to give up a few of their personal liberties if it means keeping ISIS out of Texas.  Making matters worse, from the conservative POV, Rand accused conservative hawks of creating the Islamic State terrorist group, with their indiscriminate supply of weapons to the region over the past two decades.

What sets him apart from other Republicans is that he is against big government period.  Most Republicans embrace the defense industry because it provides jobs in their districts.  Rand wants to have the same checks and balances on the military as he does every other part of the federal government.  His previous filibuster was against drones, which he staged against the vote for the WH nominee for CIA chief, John Brennan.

In this segment of his interview with Jon Stewart, Rand argues what is the point of a perpetual war on terror if you are willing to give up your personal freedoms to defend it.  However, he is still very clever with his references.  Note his casual reminder of the murder rate in Baltimore and his "disgust" with the approval for a mosque near the 911 memorial in New York, which will endear him to conservative voters.

My concern is whether Rand Paul is truly genuine in his beliefs or if he is shrewdly reaching out to a middle ground that virtually all other Republican candidates are ignoring or have abandoned, hoping he can win enough votes in key primaries to put him in contention for the Republican nomination.  Either way it is a big political gamble, but unlike Marco Rubio in Florida, he can still run for his Senate seat in Kentucky.  All he has to do is not have his name on the presidential ballot in his home state.

You get the feeling that Rand knows how to play two sides of an issue very well.  He isn't the committed Libertarian like his father.  He is more the preppy Libertarian who mulls over these issues at a coffee shop, like you see on college campuses, which is why he is doing so well among young voters.  However, he is losing the geriatric Fox audience, which is who the other Republican presidential wannabes are aiming at.  These are the voters Republicans count on to come to the polls.

Whatever the case, Rand Paul has certainly made this election cycle interesting.  He has the potential of energizing the GOP, or in a worst case scenario becoming an Independent candidate like John Anderson in 1980, who created the National Unity Party in the general election, after failing to topple Ronald Reagan and George H.W. Bush in the primaries.  Rand's views sit somewhere in between the two political parties as it is, having chosen the Republican Party more for convenience, I think, than anything else.  All though, his economic thinking is clearly out of the Milton Friedman school of thought, with stands against the minimum wage and federal subsidies for the health insurance exchanges.

But, most voters don't look at all these nuances.  They take what they see on the surface, and right now Rand Paul is scoring big among moderate voters, Republican and Democrats alike, for his stand against the provisions in the Patriot Act that allow for unwarranted government surveillance of  personal records.  This is the dreaded Section 215, which John Oliver very thoroughly covered in this segment of Last Week Tonight.  It seems that Rand Paul took up John Oliver's call to arms.

Posted by James Ferguson at 9:43 AM