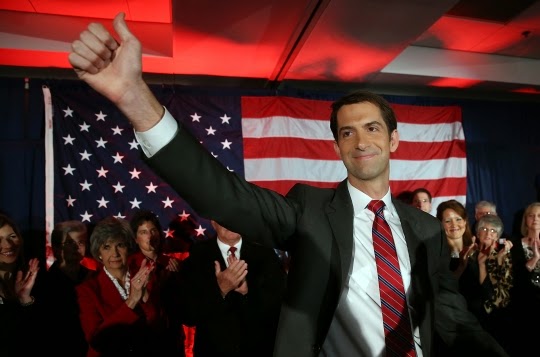 I suppose being the youngest member of the Senate is a bit like being the youngest child, you feel the need to shout to be heard, and boy has Tom Cotton been doing a lot of shouting these days.  His latest twitter rant did attract the attention of the Iranian foreign minister, but probably not in the way he wanted.  Javad Zarif isn't wasting much of his time with Young Mr. Cotton, who seems to think he is the real voice of American foreign policy, challenging Zarif to a "debate."

It wouldn't be so bad if senior GOP statesmen like John McCain or Lindsey Graham would take shouting Tom out to the wood shed and give him a good caning, which he richly deserves.  Instead, they coddle him like a spoiled child.

There are a couple of reasons for this.  The first is that Tom is a former soldier, apparently in an effort to prove his manhood.  He served tours in Iraq and Afghanistan during his 4-year stint in between his law and political career, and we all know how much America has fallen in love with its men and women in uniform.  The second is that he unseated a long standing Democratic Senator from Arkansas, Mark Pryor, thanks to his Tea Party friends.  This apparently gives Young Tom clout in Washington.

However, it doesn't give him the right to try to undercut American foreign policy with his open letters and twitter rants, which only serve as a great embarrassment to himself and the Republican Party.  To think the GOP once prided itself on foreign policy, but now allows young upstarts like Tom Cotton to dictate its policy positions.

His little publicity stunt certainly didn't endear him to the military.  Major General Paul D. Eaton fired back at the open letter Cotton wrote the Iranian foreign ministry, which included the signatures of 46 fellow GOP senators.  General Eaton called the letter mutinous, further stating that it was "a gross breach of discipline, and especially as a veteran of the Army, he should know better."

Unlike former Army Lieutenant Tom Cotton, the US military still respects the President and abides by his decisions.  In this case, most military advisers fully support his decision to negotiate a nuclear treaty with Iran.   Yet, the conservative right wing continues to claim that this deal only serves to embolden Iran and puts allies like Israel in peril.  Oddly enough,  Mossad supports the negotiations as well.  Its military chief criticized Israeli PM Netanyahu and the US Republicans for trying to sabotage these efforts to broker a nuclear deal.

The Republicans refuse to heed any of this unsolicited advice and proceed to find ways to undermine the President's authority.  A few Republicans stress caution, notably Bob Corker, who first introduced the bill that would give the Senate the right of refusal on the Iran nuclear agreement the President is pursuing.  Corker apparently still wants to give the President some discretion on the matter, toning down the original harsh language.  He felt he was on the verge of a veto-proof bill, thanks to widespread Democratic support, notably future minority leader Chuck Schumer.  However, an amendment co-sponsored by Marco Rubio and Cotton insists that Iran recognize Israel, which of course would kill any deal.  But, that's the whole point, isn't it?

Cotton's twitter rant is further proof that the Republicans don't want any part of a deal with Iran.  They would prefer to see the country remain a pariah state despite the fact that Iranian military forces are helping Iraqi military forces rein in ISIL.  But, Young Tom doesn't give a rat's ass.  For him and many other Republicans, Iran will forever remain a part of the axis of evil.
Posted by James Ferguson at 1:12 PM