Riding with the King 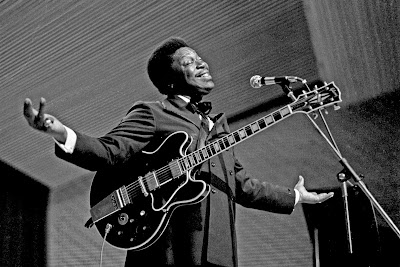 Psychedelic Rock and Blues seemed like a strange combination, but it became the norm in the 60s, with many Blues musicians playing along side Psychedelic musicians, or vice-versa depending on your point of view.  Here is a recording of B.B. King playing with Jimi Hendrix at the Generation Club in NYC in 1968.  A lot of Psychedelic guitarists moonlighted as Blues musicians like Jorma Kaukonen of Jefferson Airplane, offering up songs like Hesitation Blues.

After Cream had reached its peak in the late 60s, Eric Clapton went back to Blues-based ballads and formed a life-long relationship with B.B. King, capped by the wonderful album, Riding with the King.  Many felt that relationships like this kept Blues alive, but the music was never going away.  It is the most identifiable American music, and immensely popular the world over.

When Ry Cooder teamed up with Ali Farka Toure in the 1990s, many thought that the Malian musician was playing a form of the Blues, and were surprised to learn that these were traditional ballads from his home country.  The late great Clarence "Gatemouth" Brown was part of this collaborative album, Talking Timbuktu.  Martin Scorsese explored this musical bridge in his documentary Blues: A Musical Journey with Correy Harris serving as host.

B.B. King has received the lion's share of attention over the years, but so many great musicians have come and gone including my favorite, John Lee Hooker, who gave us many memorable songs, like One Bourbon, One Scotch, One Beer, which never seems to grow old.

It is hard for us to imagine anyone filling these legends' shoes, but there are young musicians keeping the music going.  Some returning to the roots, like the Carolina Chocolate Drops.  Blues grew out of the negro jigs and minstrel shows of the 19th century, eventually shaped into the music we are most familiar with by immortal musicians like Leadbelly.  Each region had its own indigenous form, but it is the Mississippi Delta Blues that became the standard by the mid-20th century, personified in Robert Johnson.

Thanks to the tireless effort of Moe Asch many of these early songs were recorded and became a part of the American discography at Smithsonian Folkways.

This is the sound that would shape the music of Eric Clapton, Robert Plant and other Rock musicians.  Led Zeppelin did a wonderful variation of Memphis Minnie's 1929 classic, When the Levee Breaks.  She was one of the great vocalist of her era, along with Ma Rainey and Bessie Smith.

Blues is living history.  The songs have been passed down from one generation to the next for the last two centuries.  For many, B.B. King personified the Blues.  He was able to enjoy a stellar career, along with the royalties that came with it.  Most Blues musicians saw little of the revenue their songs generated, often dying in poverty, with their ballads resurrected by later musicians.  B.B. was one of the few to enjoy the fruits of his labors, honored at Kennedy Center in 1995, and again by President Obama in 2011, making him the undisputed King of the Blues.