Jeb and the Fatman 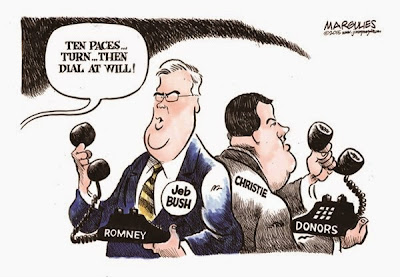 Jeb "the Caveman" Bush and Chris "the Fatman" Christie seem content to bide their time while others declare their candidacies.  No real hurry I guess, especially since both have Super PACs raising bucket loads of cash, with fetching titles like The Right to Rise and American Leads.  Jeb has made the unprecedented move of turning over key campaign functions to his Super PAC, freeing him up to present himself on the campaign trail rather constantly worry about raising funds.  The bulk of his financing is expected to come through the Super PAC.  Governor Christie will probably follow suit.

The two are hoping that as governors they will draw on the widespread dissatisfaction with "Inside the Beltway" politics. They also represent relatively moderate views within the GOP, unlike former Governor Huck, expected to declare himself this week, who is planning to go after the religious conservative heart of the Republican Party.

Jeb is polling pretty well at this stage.  Christie lags far behind, but if the last election cycle is any indication, polling numbers will fluctuate wildly in the coming  months.   Maybe Christie should opt for the Caveman diet that Jeb has embarked on to get rid of that "doughboy" look.

He barely lost the 1994 governor's race in Florida to Lawton Chiles, touting his school vouchers, otherwise he might have been running for President in 2000 and not his brother George, who surprisingly upstaged Ann Richards in Texas the same year.  Jeb won in 1998 but it would have been unseemly for a governor less than two years into his first term to run for President, so the GOP establishment went with George.

Chris Christie is testing the waters with social security reform, promoting a leaner meaner system that would purportedly leave more money for the next generation.  If he is so worried about everyone paying and getting his or her fair share, he would raise the maximum taxable income limit on FICA, which currently sits at $118,500, but that would be a tax hike and we can't have that.

Their ideas sit well with establishment Republicans, so they will both be well funded on the campaign trail, but first Christie has to get himself out from under this Washington Bridge scandal that has haunted him since his re-election in 2013.

Jeb is sufficiently far removed from the mess he created in Florida with his voucher system, which failed to improve the school system.  It's Rick Scott's mess now. That doesn't stop Jeb from dabbling in education though, even going so far as to join hands with President Obama on common core and other reform measures.  The big reason for the plummeting state ranking in Florida is because the education budget was essentially gutted during Bush's terms in office.  Florida has one of the lowest per capita rates in state funding.  Rick Scott's property tax cuts didn't help matters any.

Unfortunately, both Jeb and Christie get away with a lot thanks to the friendly media, which repeatedly lets them both off the hook.  They offer contrasting styles, much like the old television show, but their motives are the same.  They want to defund the national government just like they have their state governments, putting domestic programs deep into the red and subject to spending cuts.

Their answer is to privatize education with charter schools, which failed to be the magic elixir many imaged, including Arne Duncan, who heads up Obama's education cabinet.  Christie joined then mayor Cory Booker on a similar charter school scheme in Newark. which hasn't worked out very well either.  Do you really want to trust these guys with your children?

For now, they are running shadow presidential campaigns, with their Super PACs promoting their names. They have another governor to contend with in Scott Walker, but he has a penchant for sticking his foot in his mouth, so my guess is they won't have to worry too much about him.  The only question is do these two cancel each other out?  If so, will they join forces to battle the GOP presidential field as Jeb and the Fatman?