With all eyes on the caucuses, Iowa is radiating in its moment in the sun.  Even the weather is cooperating -- partly sunny with the high around 43 F today.  By evening, it is supposed to drop down to around freezing with the chance of rain or snow.

The Republicans have it relatively easy, a straight-up vote, while the Democrats do it the old fashion way, gathering in groups behind their candidates, listening to last-minute appeals and shifting allegiances if their candidate doesn't have enough persons to count.  This means O'Malley's supporters might come into play given how close it is between Hillary and Bernie.  You can read more about this system at How Stuff Works.

The state garnered a lot of publicity when Jimmy Carter won the state in 1976, albeit behind "uncommitted."  Over the years, Iowa has not been such a great bellwether for either Democratic or Republican hopefuls, and today many political pundits downplay its significance.  Still, if you are an insurgent candidate like Bernie Sanders a win in Iowa is big. Just ask Barack Obama, who carried the state in 2008.  However, Mike Huckabee's surprising win didn't hold up over the long run.

Similarly, a loss can be utterly devastating.  Democratic insurgent candidate Howard Dean was ahead in most national polls heading into Iowa, but he took a big thumping in the Hawkeye State and saw his big lead in New Hampshire evaporate almost overnight after his infamous yell that was meant as a rallying cry.  Donald Trump and Ted Cruz take note.

Not everyone likes it.  In 2008, Michigan and Florida tried to jump the gun by holding their primaries early, only to have them nullified by both the Republican and Democratic national committees.  This led to a major crisis in the Democratic Party, as Hillary had won the lion's share of delegates from these two states.  She fought hard to have these delegates counted, but rules are rules and in the end the two states had to sit out the campaign in the "penalty box."

Mostly, Iowa allows presidential candidates to get up close and personal with their electorate.  It also allows for a lot of press highlights, as the media swarms the state each presidential election year, basically setting the tone for the campaign trail.  New Hampshire also gets a lot of coverage being the first open primary, but Iowa has been the focus for the last two months, with no crowd too big or too small for a presidential candidate.  These candidates will go anywhere for a vote, and brave the worst weather conditions in the process.  To be fair, Martin O'Malley was the only candidate campaigning in the state that day due to inclimate weather. 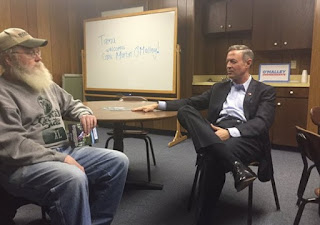 Someone should come up with a real time television show for Iowa like Robert Altman did for New Hampshire.  Tanner '88 followed a faux candidate through the arduous process of making his name known in a primary, brushing shoulders with real candidates on the campaign trail.  Maybe then we would have a better idea how this caucus system works.