or How I Learned to Love Bill Clinton 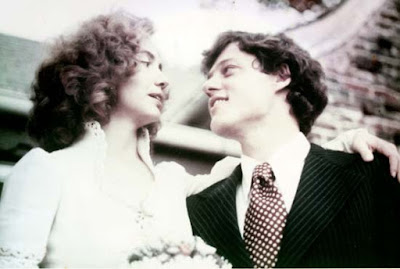 Historians will no doubt have a field day with the Clintons in the years to come, especially if Hillary wins in November.  There has never been anything in American history to compare with this power couple, which ruled Arkansas for 11 years and has the potential to make it 16 years in the White House.  Add to that Hillary's 8 years in the Senate and 4 years as Secretary of State.  There was even an attempt at one point to nominate Bill as Secretary General of the United Nations after Kofi Annan stepped down.

If there had been any doubts that Bill had affairs, the Monica Lewinsky affair erased them.  Horny Bill was finally forced to come clean and what an ugly affair it was,  Not surprisingly, he used much the same defense he used when accused of smoking marijuana, he touched but didn't penetrate. Granted, it wasn't an impeachable offense, but it certainly made BIll look like the predator-in-chief.  The odd thing though is that he escaped this too.  Most Americans actually felt sorry for Bill, and Monica was presented as a Capitol Hill Lolita, whose purpose all along was to entice the President into an affair, right down to her well-publicized dress.

We found out in 2000 why Hillary put up with all this, when she chose to run for the vacant New York Senate seat left by Daniel Patrick Moynihan, who gave her his blessing.  This is all the more amazing since Hillary had only declared residency in the state in 1999.  To this point, their official residency had been Arkansas, but there was little chance Hillary would win over the electorate in her home state, so she made New York her home.  Her high profile ensured instead success.  She had no problem fending off her Democratic challenger, Mark McMahon, and when Mayor Rudy dropped out of the Republican primary for health reasons, it left the door wide open for her triumphant victory in November. 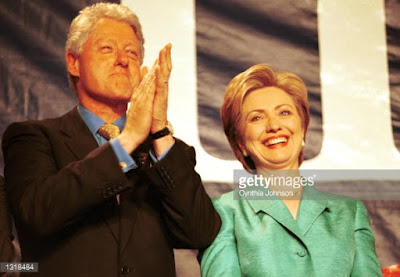 You'd think she would drop Bill, who was little more than baggage at this point, but they clung together, amassing a sizable fortune in speaking fees and book deals that would be the envy of any former First Couple.  The former president had time to regain some dignity.  He went through bypass surgery in 2004, and it seems his sins were all forgiven.

After Bill recovered, he spent his time building his library back in Little Rock, enlisting the services of New York architectural firm, Polshek Partnership (now Ennead Architects) to design the intriguing building that cantilevers over a grassy knoll like a space-age covered bridge.  This is the most impressive Presidential library to date, costing well over $150 million, exceeding the allotted federal budget for such endeavors.  Not to worry, Bill got some financial assistance from his Saudi friends.  When Hillary chose to run for President in 2008, this would become an issue.

Meanwhile, Hillary was trying to make sense of her new role as Senator, wondering what Uncle Daniel would do in these thorny situations that came up.  Should she vote for Bush's massive tax cuts or not?  Should she vote for the Patriot Act or not?  Should she approve the Iraq War Resolution or not?  To her credit, she voted against the tax cuts, but her votes for the Patriot Act and Iraq War Resolution would come back to haunt her in 2008.

In eight years, Hillary had made quite a name for herself.  She won an easy re-election, and it seemed that the Patriot Act and the Iraq War were behind her.  She had sponsored over 700 pieces of legislation.  She became an active voice in the Committee of Armed Services, and her name was now being mentioned prominently as a presidential candidate.  But, along came a junior senator from Illinois who threatened to undo everything she had put together, everything she had been forced to endure, everything she held dear. 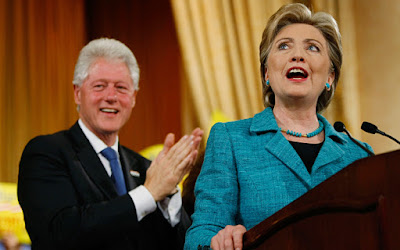 For all of Hillary's name recognition and recent accomplishments, nothing could prepare her for the grueling presidential campaign trail that began in January, 2007.  She had been down this road before with her husband, but Obama proved to be a much tougher challenge than the "six pack" back in 1992.  Horny Bill did his best to offer his support, but you got the feeling he was more in this for himself than he was his wife.  She looked like a surrogate candidate, as Lurleen was for Governor George Wallace in Alabama.  Her voice quivered and broke, and she often seemed at a loss for words on the campaign trail.  Her managers had banked her entire candidacy on Super Tuesday, only to find the sneaky junior senator had pulled off more primary victories than her, including key southern states in Alabama and Georgia.

It was a calamitous turn of events for the former First Lady and New York Senator.  She came out of Super Tuesday with a slight lead in delegates, but the damage was done.  Obama would tear through the Midwest like a tornado.  Even her last line of defense, Texas, went Obama's way in the caucuses, offsetting her primary victory.  There was no way she could secure the nomination at this point, so it came time to strike deals, making sure she had a place in the Obama administration.  Some were even suggesting her as Vice-President.

The story could have ended here, but Hillary decided to step down as the country's highest ranking diplomat in 2012 and quietly start amassing a war chest for a presidential run in 2016.  Everyone knew what was afoot, but Hillary played coy.  She wanted to check any presidential ambitions of others, particularly Elizabeth Warren, who had become an early favorite among Democrats.  By not declaring, she essentially kept others from running, as few persons wanted to go up against her formidable stature, especially now that she had the presidential seal of approval. 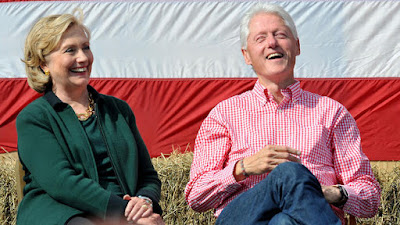 An independent senator from Vermont became impatient, feeling it was unfair for Democrats not to have a delcared candidate, especially with so many Republicans tossing their hats into the ring.  It seemed like an impromptu event.  Few took Bernie seriously.  Who's going to vote for a 74-year old Socialist Jew, whose track record is that of being a thorn in everyone's side.

Whether or not the Clintons win the White House again, their place in American history is assured.  No power couple has held this much influence in American politics since the days of Franklin Delano and Eleanor Roosevelt, inspiring equal parts praise and condemnation.   Not bad for a Boy from Hope and his former Goldwater Girl.