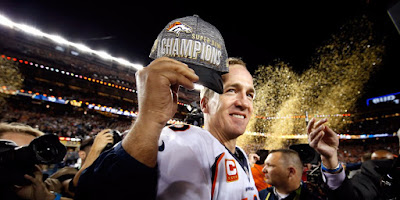 Super Bowl 50 didn't exactly live up to its hype but it was the perfect stage for Peyton Manning to cap a memorable career.  The venerable quarterback who at times has looked like an old man on the field did what he had to do and can now bid adieu to the game he loves so much.

It was an improbable run as Manning missed nearly half the season.  He was even benched at one point because of all the interceptions he was throwing.  That was due to a torn plantar fascia in his left foot, which meant he could not put enough weight down on that foot to get a strong throw.  Rumors soon circulated that he was taking performance enhancing drugs so that he could stay in the game, HGH to be exact, which threatened to tarnish his stellar career.

This is a brutal game and quarterbacks are all too vulnerable with 300-pound lineman bearing down on them on every play, not to mention the pesky linebackers and defensive backs zeroing in on blitzes.   Somehow, Peyton has managed to survive the worst of it, having to only sit out one season, which led to him being dropped by Indianapolis.  It seemed like his football days were over.

John Elway, the general manager of Denver, saw a golden opportunity and signed Manning to a five-year deal worth $96 million.  Elway knew the quarterback still had some good years left in him and was rewarded with an astronomical season in 2013, when Manning racked up the biggest numbers of his career.  Unfortunately, the Broncos ran into a buzz saw in Super Bowl XLVIII and Manning once again looked done.

Manning is an eternal optimist, as it turns out, and hung in there.  Meanwhile, Elway addressed the team's shortcomings, ramping up his defense to match that of the Seattle Seahawks, which was considered the league's best that year.  It meant Manning had to take a pay cut to fit all these new players under the salary cap. 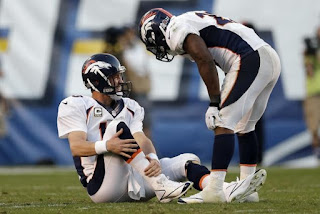 This was widely seen as a transition year between Manning and Brock Osweiler, who Elway was grooming to take Peyton's place.  When Manning stumbled, Osweiler came in, had a couple of good games then stumbled himself.  Turns out Brock wasn't quite ready for prime time.  The time off allowed Manning to heal and he came back for the playoffs with a renewed vigor if no longer the greatest skill set.  Peyton's role now was simply to score  a few points and manage the clock.  The stout Denver defense would take care of the rest.  That's exactly how it played out Sunday night.

Cam Newton was set for a coronation as the new quarterback prototype -- big, strong, nimble, able to leap tall defensive players in a single bound.  He is at the prime of his career and has given defenses fits all year, earning the NFL's most valuable player.  His ability to elude even the most determined pass rushes has been every defense's worst nightmare.  The Denver defense turned out to be the self-professed Superman's kryptonite, as the Broncos sacked him six times (a season worst for Cam), forcing two fumbles and intercepting him once, holding Carolina to a season low ten points.

The cocky Carolina quarterback was brought down to earth.  A painful experience in more ways than one.  It's hard to be humble especially when he had become the target of so many sportswriters' barbs this season.  Cam didn't feel like having salt rubbed into his wounds and walked out of the post-game press conference.  Something I'm sure Peyton Manning could appreciate, as he faced similar queries two years ago when his team was manhandled by Seattle.

This night, Peyton was able to bask in the glory of a golden Super Bowl victory.  He didn't have a particularly great game.  He didn't throw a single touchdown.  He had a fumble and interception of his own.  However, he delivered when the team needed him to with key drives that helped keep the game out of reach for the Panthers, who struggled against the Denver defense all night long.  It wasn't pretty, but as Vince Lombardi would have said, it doesn't have to be pretty.  All that matters is that you win. 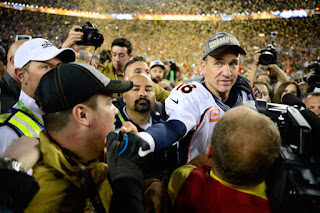 Peyton got win 200 last night, beating another great veteran Brett Favre by one win.  Even though Manning has one year left on his contract, it is doubtful he will come back next season as he has nothing left to prove.

Retirement isn't easy. Just ask Joe Montana, winner of four Super Bowls, who has had nothing but nagging health problems in the years since he left the game, but I'm sure he wouldn't trade it for his accomplishments.  He is regarded by many to be the greatest quarterback to ever play the game.

For John Elway, who retired after winning Super Bowl XXXII, that means clearing nearly $20 million in salary cap space to keep his vaunted defense, led by Super Bowl MVP Von Miller, together to make another run next year. This is how the game works today.  Lombardi would probably shrug his shoulders as there isn't much loyalty anymore.  Only 6 players on Denver played in the Super Bowl 2 years ago.  Even the coaching staff had been entirely revamped.  Give Wade Phillips full credit for the impressive Denver defense.

If Brock Osweiler had come through during the second half of the season it is doubtful Manning would have even been a factor in the playoffs, much less the Super Bowl.  But, it seemed like the Golden Year of the Super Bowl was destined to have a story book finish and it got one in Peyton Manning.