The Fallout from Iowa 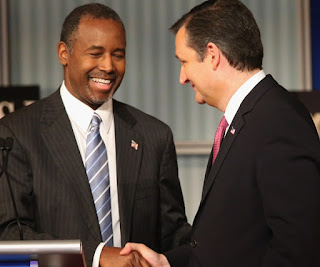 It appears the only thing Ted Cruz's camp can really be accused of is jumping the gun on Ben Carson's exit.  The good doctor demanded an apology from Ted for misconstruing his return to Florida to mean anything more than he needed a fresh set of clothes.  Being a good boy Ted apologized, but the good doctor is polling 3 per cent in New Hampshire and 8 per cent in South Carolina.  After his dismal fourth place finish in a state hopped up with religious fervor, it is hard to imagine the Seventh-Day Adventist has much hope in these states.

A beleaguered Donald Trump seized on these "dirty tricks" and Ted Cruz's questionable citizenship in a raged-filled effort to get his campaign going again in New Hampshire.  Meanwhile, his supporters are laying out conspiracy theories as to how their man lost in Iowa, including one which involves Marco Rubio and Microsoft.  Trump himself is fit to be tied that young Marco is getting all this attention in the wake of his strong third-place finish, trying to stress that second-place is better even if the two ended up with the exact same number of delegates.

On the Democratic side, Hillary went six for six on coin flips to determine state delegate equivalents.  That's a pretty amazing stroke of luck, especially since she only won by five SDE's.  Bernie is threatening to challenge the results, but would be well advised to move on as he has a substantial lead in New Hampshire and doesn't want to give Hillary any sympathy votes.  Poor Martin O'Malley failed to get even one percent of the SDE's and is suspending his campaign.

Huckleberry Mike has also suspended his campaign, fueling more speculation that he will become a "Trumpeter" like Sarah.  After Trump's epic failure in Iowa, Huck might have second thoughts.   He might want to back Ted, who has a massive ground force, kind of like Napoleon's Grand Armee, which reached into every county in Iowa, and is mobilizing similarly in New Hampshire and South Carolina.  Besides, Ted is closer to his religious way of thinking. 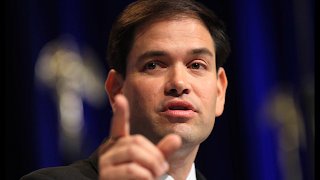 Marco Rubio also showed he had solid forces on the ground and is in good position in New Hampshire to make a similar surge.  John Kasich has wrapped up a great number of endorsements from all over the state and from the New York Times, but it seems the electorate wants a fresh face.  Marco looks like the only candidate that can bridge the divide between the Republican establishment and the insurgency that has wreaked havoc on the Grand Old Party.

This is not stopping Chris Christie from hurling abuse at Marco Rubio, repeatedly referring to him as the "boy in the bubble" in his post-Iowa rant.  The Fatman wanted to be the highest polling governor coming out of Iowa, but finished an abysmal tenth place.  The only governor he outpolled was Jim Gilmore, the former governor of Virginia.

You would think this to be a governor's year with all the disenchantment toward Washington, but not one did well in Iowa, and things aren't looking very good in New Hampshire and South Carolina either.  Jeb has the money to stay in the race past South Carolina, but if Kasich doesn't do well in New Hampshire his campaign is finished.  Christie will probably linger around, as things aren't looking very good in his home state of New Jersey, but his campaign will be all but finished after New Hampshire, where he is currently polling 6 per cent, behind both Kasich and Bush.

Hillary's late announcement kept many top ranking Republicans from running for President.  We saw a last ditch effort to recruit Joe Biden, who might have been a good compromise candidate, but for many Democrats this is Hillary's year.  She is doing well among older voters, but when you look at the Millennial age group, Bernie is way ahead, and the Millennials outnumber Baby Boomers.  While it may not be enough to win him the nomination, it does say a lot about the future of the Democratic Party. 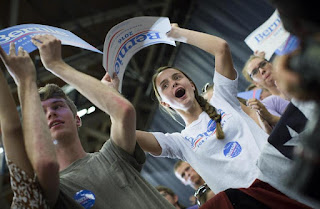 For the Democrats, it is tough to compete with the reality show that the GOP primaries have become.  The race for the Republican nomination is loaded with intrigue, petty rivalries and dirty tricks, giving it much more commercial appeal.  Bernie suggested that Hillary was packing the Iowa caucuses with out-of-state workers.  However, there is no campaign rule that explicitly says you can't do so.  Ted Cruz was doing the same.  Best to leave well enough alone.  It was a good showing for Bernie, who played Hillary to a virtual tie.

It reminds me a little of last time around when Rick Santorum edged out Mitt Romney for first place in Iowa, not that it did him a lot of good in the long run.  Romney swamped Santorum in New Hampshire, and the rest as they say was history.

Trump needs to score a big win in New Hampshire if he has any chance of winning the nomination.  However, his petulant cries in the wake of his Iowa loss aren't helping.  What was lacking all along was a ground game to match his bellicose rhetoric.  There is no way to mobilize troops to the extent he needs to do in five days.  Sam Nunberg saw the writing on the wall some time ago, proving to be a better prognosticator than Nate Silver, who had given Trump a nearly 50 per cent chance to win Iowa to Ted's 31 per cent.  Albeit, Nate noted that Iowa is a very difficult state to poll.  He still gives Trump a 61 per cent chance to win New Hampshire.  We shall see.

Posted by James Ferguson at 6:48 PM