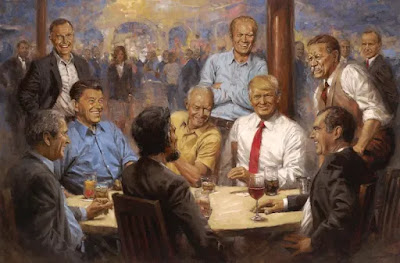 Just when you thought it couldn't get any worse, Trump proudly displays this painting of himself sitting around the table with past Republican presidents, regaling in what appears to be a joke told by Lincoln.  It's by an artist friend of Darrell Issa, who dabbles in presidential portraits.  I don't think it was so much the smile, as it is Andy Thomas made Trump significantly trimmer, and gave him the most prominent light.  While Lincoln is clearly the storyteller, he is obviously saying something about Trump.

It reminds me of the paintings Stalin had commissioned of himself, although a little less pointed than this one.  You almost wonder if Thomas studied Soviet Realism art, or maybe he just stole the idea from Cassius Marcellus Coolidge of old dogs sitting around a poker table.

For many Trumpkins, November 9, 2016, or 119 as it is called in alt-right circles, represents year one of a new America, similar to what occurred in Russia after its horrible civil war, which started in 1917.  By 1922 all the remnants of the old "White Russia" had been destroyed or beaten into subjection and a new "Red Russia" emerged to be called the Soviet Union.  To his loyal supporters, we now live in the United States of Trump.

The process isn't complete.  We are still going through a civil war with ever increasing public unrest and midterm elections right around the corner.  If the Democrats don't gain significant ground this November, Trump will see this as a victory for himself, and it will be that much more difficult to unseat him in 2020.

For his part, Trump said he was fine with the protests and the way he is treated by the press during his interview with Leslie Stahl.  He was looking very sanguine as if he had plenty of time to review the questions beforehand.  The painting came into view during the walking tour part of the interview, and has since been the subject of scrutiny on social media.

The political homage plays straight into Trump's enormous ego, and serves as a counterpoint to this painting someone left in his DC hotel, although the hotel vociferously denies this was the case.  You can bet that someone in his White House, maybe Trump himself, wanted to send a clear message that he leads the Republican Party, not Vladimir Putin, or even Abraham Lincoln for that matter.

For all intents and purposes he does, as the GOP has essentially given up criticizing him.  You don't hear a peep from "Little Bob" Corker anymore.  "Oven Mitt" Romney went out of his way at a rally in Arizona to say that he stands behind the President, seemingly so secure in his bid for a Utah Senate seat that he is now campaigning on the behalf of other Republicans.  "Lindsey Antebellum" Graham is now one of Donald's greatest supporters.  The great Prevaricators, one might call them, all paying deference to the Supreme Leader of the Grand Old Party after openly criticizing him before.

The only major Republican to still be vocal in his criticism of Trump and the GOP is John Kasich, who has essentially rebranded himself an Independent, and is touring the country with Colorado Democratic Gov. Hickenlooper in what looks to be the 2020 Libertarian ticket.  However, Kasich works on the same false equivalences that many conservatives do when criticizing their party, saying the Democrats are just as bad.  Democrats certainly have their faults, but they are nowhere near the depraved level the Republican Party has sunk today, and I'm surprised Hickenlooper has chosen to be Kasich's sidekick.

Any illusion that disgruntled Republicans will break ranks is pure fantasy.  We saw that on the confirmation vote of Judge Kavanaugh.  It was obvious many Republican senators had their doubts, but only one broke ranks and then only on the vote to stop debate, despite the serious concerns expressed over Kavanaugh's nomination by the American Bar Association, the America Magazine of the Jesuits, thousands of the law professors throughout the country, and former Supreme Court Justice John Paul Stevens.  This goes beyond the testimony of Christine Blasey Ford and other women who accused him of sexual abuse.

For Trump and key members of the Republican Senate it was a power play and they won!  Proper judicial committee review be damned.  This was all about getting Trump's man on the bench so that he could have an ace in the hole should the special investigation into his campaign's financial and political ties with the Russian government get nasty.

Maybe Abe is making some joke about the Supreme Court, which would help explain the grins of all the Republican presidents in this jocular setting?

Like it or not, Trump has completed his takeover of the GOP.  The only thing left now is to subdue his Democratic opposition and let his agenda wash over the country like a "red tsunami."  First a visit to the folks in the Florida panhandle and stomp for his fellow Republicans Rick Scott and Ron DeSantis, who are polling behind their Democratic rivals.  This will help make up for his lack of response to the crisis after Hurricane Michael.