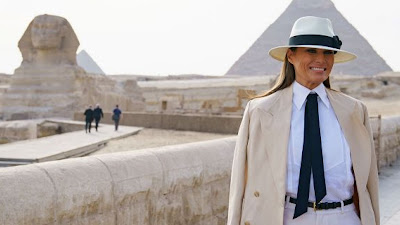 For Melania it must have seemed like old times.  Here she was on a fashion shoot in Africa, taking full advantage of all the stunning backdrops.  Her husband, and for that matter American politics, far far away, although she took time to chime in once in awhile on twitter.  Americans lapped it up and it seems Africans did too, even if she looked like a colonial-era wife on safari most of the time.

You can almost imagine her as Karen Blixen, married to a baron who showed little interest in her so she started forging her own identity in this strange land.    Unfortunately for Melania, she only had a week so had to make the most of it, showing her support for wildlife relief efforts and children's welfare.  This is in sharp contrast to the policies of her husband's administration, which has condoned big game hunting, lifting the ban on ivory, and doesn't seem too care very much about the general welfare of these "shithole countries," except when it comes to white farmers in South Africa.

The White House badly wants us to like Melania, which is easy enough to do.   She seems genuinely happy when out of the reach of her husband and appeared to engage well with her hosts.  She's no Michelle, or even Laura, but in her own way provides a grace that is sorely lacking in her husband.  A veritable Beauty and the Beast.

The big difference is that the Beast had a heart buried inside that gruff exterior, whereas Donald has no heart, especially when it comes to Africa.  He has the typical American view that Africa is a dark continent which has steadily eroded since colonial times, and that we are just throwing money away in providing relief to these beleaguered nations.  As a result, his administration has cut humanitarian aid by a whopping 35% over the last two years.

You would think that in his empty solar plexus he would understand that Africa is a continent of seemingly unlimited resources and cheap labor, and that the US has the chance to exploit it as China is doing if only he would show a little good will.

I suppose this is part of the reason for Melania's visit to assure select African leaders that America still cares.  However, it takes more than a glamorous first lady to set the tone for the administration.  Many of these countries are still without US ambassadors, including South Africa, where he appears so deeply worried about the welfare of its white farmers.

Surprisingly, some African countries hold Trump in high regard, notably Nigeria, Tanzania and Kenya, where he enjoys favorable ratings above 50 per cent.  I suppose it is because of his celebrity status, as he has shown little interest in these countries.  Nevertheless, these countries want to remain on Trump's good side, as so many countries amusingly showed after his inauguration.

In the meantime, African countries will have to content themselves with Melania.  I must say she certainly looked good in jodhpurs. 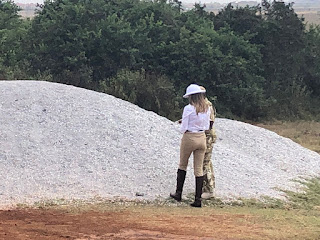