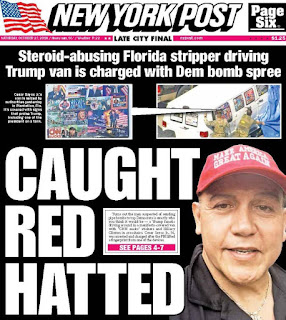 One of the great things about America is that you can reinvent yourself.  This has long been the case with immigrants ever since the Mayflower.  Even today people come to this country hoping to start their lives anew.  That was probably the case with Cesar Sayoc's parents.  He was born to a Filipino father and Italian mother in Brooklyn, New York.  It seems things didn't turn out well with Cesar.  He got off to a good enough start, was attending college in North Carolina, but never seemed to find his footing.  Fifty-six years later he was found living out of the back of his white Dodge van, plastered with stickers regaling Donald Trump and lambasting all the things he hated.  A far cry from his humble origins.

What makes Sayoc even more curious is that he is a White Supremacist.  Maybe it was all the steroids he had been using to pump up his body, or just a series of bad breaks that ultimately led to him being homeless.  Whatever the case, Sayoc found a father figure in Trump, and became politicized in 2016, much like the ruffians that banded together in Kai's cult from season 7 of American Horror Story.  Maybe he even imagined himself as Kai, leading a shadow army on twitter and facebook?

Social media also allows you to reinvent yourself, cultivate a following or just be a thorn in the side of others by trolling their pages.  Sayoc was especially busy trolling Andrew Gillum's page, calling him a Soros puppet in his more civil moments.  I guess he had only so many envelopes and pre-cancelled stamps, so Gillum was spared one of these pipe bombs, but not George Soros.

All the persons who received Sayoc's personalized letter bombs were favorite Trump targets, but don't expect our President to hold himself in any way accountable.  Sayoc was quickly dismissed as a freak, yet such freaks now abound at Trump rallies, which Sayoc regularly attended.  He even became a celebrity of sorts among the Magaheads.

Trump loyalists have either dismissed the bombs as false flags or Sayoc as a plant, designed to break their momentum going into the midterms.  A high school friend posted a meme on facebook questioning whether Sayoc could have pulled off this elaborate letter bomb campaign because he would have had to hand deliver all these padded envelopes given there were no postmarks on the letter bombs.  A little fact-checking before he posted the meme would have answered his question.   You don't need a postmark if you buy pre-cancelled stamps at the post office vending machines or through stamps.com.  You can imagine a guy like this isn't going to go up to the counter and declare all these bulging envelopes addressed to prominent political figures.  However, Sayoc wasn't very careful in making the bombs or stamping the envelopes, as the FBI was immediately able to trace his fingerprints given he had a lengthy criminal record.  No one likes a sloppy anarchist in their ranks, especially when these miscreants are supposed to be on the Democratic side.

For weeks now, Trump has been egging his followers on with hyperbolic warnings of the Democrats rioting in the streets this November.  He has admonished his supporters to get out to vote and ensure he has a Republican Congress to clamp down on these unruly protesters after the elections.  He has attacked Democratic leaders, George Soros, the mainstream media and anyone else who questions his authority.  He's even condoned violence, saying we need more guys like Greg Gianforte who bodyslammed a British reporter back in 2016 when he felt the questions got too personal.  So, what's a guy like Sayoc to think?  He was just acting in the spirit of the rallies he attended, putting a little fright into Trump's loudest critics.  No harm, no foul.

The same cannot be said for the latest mass shooter who gunned down 11 persons in a Jewish synagogue in Pittsburgh.  Fortunately for Magaheads, Robert Bowers isn't a Trump loyalist.  In fact, he thinks the President has sold himself out to the Jews like everyone else in this country, and that we need to get rid of these "children of Satan."  However, Bowers subscribes to a social media site, Gab, that is an internet haven for alt-right agitators, which many of Trump's supporters follow.  Donald Trump Jr. even has an account on Gab.

This lunatic fringe has spilled over into Trump rallies, representing a clear and present danger to our society.  Yet, our president continues to egg them on at rallies and on twitter with his highly-charged rhetoric.  This isn't any different than putting rifle crosshairs on Democrats, as Sarah Palin once did, then expressing shock when someone actually takes aim at one of these persons, as was the case with Gabby Giffords.

Yes, you are responsible Donald J. Trump.  These are your demented political offspring, just as Palin owns Jared Lee Loughner.  You create an environment of hate, you bear the burden of those who act on your behalf, whether you like it or not.