I Never Promised You a Rose Garden 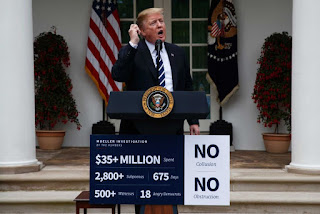 A dark cloud fell on the Rose Garden as His Trumpness lashed out at Lady Pelosi for allowing investigations to proceed against his royal house despite all his best efforts to introduce new legislation.  At stake is a much ballyhooed infrastructure bill that Trump has been offering ever since the 2016 campaign.  Lady Pelosi and Lord Schumer offered to meet him halfway on the bill, but the annoying Duke of Orange was too upset with dear Nancy to even discuss the matter, storming out of the meeting after issuing a diatribe, and heading straight to the Rose Garden where a lectern decked in a "no collusion, no obstruction" banner awaited him to continue his tirade to the press.

Safe to say this show was all planned in advance, hoping to achieve maximum effect.  The only problem is that he was unable to stick to the script, spinning wildly out of control and looking like an aggrieved teenager whose mommy found a Playboy magazine under his mattress.  Trump still wasn't satisfied and called in his staff to tell everyone what a "stable genius" he is and that he is in complete control of the White House.

The petulant boy king never misses an opportunity to vent his rage.  It's pretty clear he has no infrastructure plan.  That went up in smoke two years ago when he disbanded his business council that was supposed to be giving him advice on the matter.  Many had already resigned over the remarks Trump had made in the wake of the violence in Charlottesville at a white supremacy rally, leaving him with only a handful of token advisers.

Whenever Trump isn't boasting about how great the economy is or how he is creating so many jobs, especially for black people, he is lashing out at Nancy Pelosi for putting roadblocks in his way.  Hard to believe Madame Speaker has only been in power four months. Trump claims these investigations are stopping him from proposing valuable legislation, but the only legislation he has ever proposed is a funding bill for a border wall, and more recently an outline for an immigration plan which would demonstrably favor European immigrants over those from Latin America and Muslim countries.  Call it the Wonder Bread Bill because it is white, full of air and has very little substance.

Infrastructure was never anything more than a way to lure Bernie Bros during the general election.  If such a bill was ever to be seriously considered in Congress it would no doubt heavily favor the fossil fuel industry.  Trump and his Republican allies refuse to acknowledge the growing strength of wind and solar power, the two fastest growing energy sectors.  Instead, these conservative dinosaurs continue to pitch "clean coal" and "drill, baby, drill."  Trump is determined to shed the clean air and water acts, making it more favorable for fossil fuel industries to operate with a minimum number of regulations.  This despite the growing number of toxic spills across the country.

Similarly, he refuses to accept the growing demand for electric cars and other forms of ecology-friendly transportation by capping fuel economy standards so that the Big Two auto companies can continue to dump their SUVs and oversized trucks on the market.  Chrysler has become the wayward stepchild nobody wants.  California and other states have refused to concede on this issue, meaning that Ford and GM would still be obliged to make lower carbon-emission cars to meet state regulations.

We are in the middle of a major transformation in energy use.  Tesla has shown us that an electric car is viable.  Their Model 3 has a 325-mile range, roughly equivalent to a tank of gas, and is very much in demand.  The only problem for Musk has been meeting that demand as his auto plants can't make the cars fast enough.  If you want to keep your old car, you can buy an electric conversion kit for virtually any model at a fraction of the cost of a new model.

Every foreign car maker now has an electric car on the market, but neither Ford nor GM has invested heavily in e-cars.  Ford has no electric cars on the road, and Chevy begrudgingly increased production of its Volt to satisfy the Obama administration after its 2008 bailout.  Chrysler, which is currently owned by Fiat, claims to be developing an electric mini-van for 2020, built atop a Peugeot electric car platform.  American car companies have fallen so woefully behind the rest of the world in innovative car solutions that the only sales they can rely on are SUVs, big trucks and revamped muscle cars, although Ford claims to be developing an electric Mustang.

Any transportation bill should include funding for new car innovation not to mention smart roads like this one recently introduced in Sweden, which allows cars or trucks to recharge while in motion.  We should also be providing money for high-speed electric rails so that we can reduce our reliance on airlines.  The aircraft industry is quickly becoming one of the largest producers of carbon emissions, as more and more people rely on airlines to get from point A to point B, given rail lines are minimal in this country.  These and many other ideas were outlined in the Green New Deal that was shot down in Congress because of the unwillingness to think outside the box.

If Trump was smart he would sign onto an idea like this.  It has already been written for him.  All he has to do is endorse it and he would expand his base two-fold.  Instead, he echoes the inane talking points by Fox pundits, lifted from some notes AOC made in haste.

The Green New Deal was inspired by FDR's New Deal back in the 1930s, which led to the creation of the Works Progress Administration.  The WPA built roads, bridges and dams all across the country, providing badly needed transportation improvements and clean energy in the form of hydroelectric dams. The Hoover Dam continues to power much of Southern Arizona, Nevada and California.  This is exactly the type of infrastructure plan we need now!

Unfortunately, the problem goes beyond Trump.  Pelosi, Schumer and much of the entrenched Democratic leadership is as beholden to the fossil fuel industry as are the Republicans.  Nancy herself put the brakes on the Green New Deal, and the Senate put it up for a faux vote to table any further discussion on the matter.  There simply is no political will to take a new transportation and infrastructure bill seriously.  Too many vested interests.

So, why did His Trumpness have this meeting at the White House?  He proudly upped the price tag of a new infrastructure bill to $2 trillion after Lady Pelosi and Lord Schumer offered one trillion, but not a single penny came from these discussions.  It was just another attempt by Trump to stonewall Congress, hoarsely proclaiming he wouldn't work with the House or Senate on any legislation until the two chambers dropped all investigations into his administration, including his son Donnie, who he stressed to the press is a very fine man.

This is the sorry state of affairs our government has devolved to.  Yet, Pelosi remains reluctant to press impeachment hearings out of fear it would sap energy from the Presidential and Congressional campaigns.  It's now or never, Nancy.  You can't put off the inevitable as Trump continues to make a mockery of our country both at home and abroad.