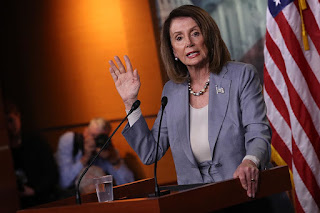 After her showdown with Trump over the government shutdown at the beginning of the year, Nancy Pelosi has been rather quiet.  However, last week she made the interesting comment that Trump "is becoming self-impeachable in terms of some of the things he's doing."  She was referring to his continued attempts to stonewall the House investigative committees who are trying to assess the depths of depravity outlined in Mueller's redacted report.

It seems Trump is itching for a fight with Nancy, anxious to make up for the one he lost in January.  He has literally commanded his staff not to submit to the House subpoenas.  This puts House Speaker Pelosi in the uncomfortable position of having to hold the Trump administration in contempt of Congress, something she is anxious to avoid.  Conversely, members of her own party are becoming increasingly anxious that she is not doing anything to hold the Trump administration accountable.  Where's the Nancy that stared Trump down on the shutdown?

There are those who still think Trump will answer to reason, but he has made no attempt to do so thus far, so why should we expect him to do so now?  Bill Barr was called in specifically to serve as his fixer and has done everything in his power to do so.  He openly taunt Pelosi at a recent presidential event.  To her credit, she shot right back at him.  The question remains will the House ever see a full Mueller report?

Meanwhile, Stevie Mnuchin is refusing to comply with the House subpoena for Trump's tax returns.  This after The NYTimes released a decade of the president's tax returns from the mid 80s and 90s in which he lost a reported $1.2 billion, more than any other person in America.  These were Trump's high flying years when he built Trump Tower and the Taj Mahal, assuming a massive debt, followed by bankruptcy.  Ever since, he has been claiming those enormous losses against his tax returns, leading accountants to speculate he hasn't paid any taxes in decades.  Of course he is not alone in this regard.  Many individuals and corporations write off their losses, showing no profits and therefor paying no taxes.  However, this does not make it right.

It's the conduct more than the tax returns or the Mueller report at this point.  Trump considers himself immune to any Congressional oversight and he has Barr and other lawyers backing him.  There is a lot of gray area here, as the Constitution doesn't clearly lay out how this oversight is to be conducted.  So, the executive branch is taking the liberty to define these rules and daring the legislative branch to challenge it.  Trump has even gone so far as to say he would drag the Supreme Court into this if the House did decide to impeach him.  However, the rules are very clear here.  The judicial branch has no say in the impeachment process.

Nancy is determined not to go down this road as she fears it will turn 2019 into absolute chaos with the 24 Democratic presidential candidates relegated to the margins of the news.  As it is, the presidential hopefuls are having a hard time getting their voices heard, except for Joe Biden, which the news media has anointed as the only Democrat capable of beating Donald Trump in 2020, pointing to polls that show the former vice-president ahead of Trump in key states like Pennsylvania, where Biden kicked off his campaign.

Trump would love nothing more than to see the election upended by the spectacle of his impeachment, which would be subsequently overturned by the Republican-led Senate.  Trump would consider himself yugely exonerated at that point and impervious to any attack from the Democrats.

However, it all comes down to how the Democrats handle the impeachment, which at this point they are pretty much committed to do.  You simply can't allow a president to get away with this kind of stonewalling, even if there is little chance the Senate would approve it.  Your play, Nancy.
Posted by James Ferguson at 7:54 PM