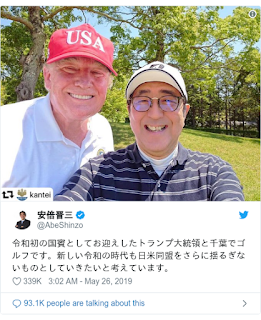 It's the Asian style to show world leaders respect even when they are dumb as a rock.  Japan's Shinzo Abe or Abe Shinzo pulled out all the stops to show His Trumpness a great time in his home country.  He even arranged a meeting with the emperor, which Trump crowed about on twitter.  It seems it was a happy time by all, judging from the photo above.

Yet, this is the same guy who complained when Obama visited Japan over Memorial Day weekend in 2016 in an effort to mend bridges by visiting Hiroshima, and giving this stirring speech.  No such memorable speech from Trump.  Instead, he indulged himself in golf, sumo wrestling and "hamberders."

The long overdue state visit was an attempt to try to get trade talks back on track, discuss North Korea, with Abe throwing in the bonus of acting as the American proxy in talks with Iran to stave off another war.  All of this makes Trump look very presidential, which is what he desperately needs right now.

All these vaunted hardball tactics have yet to result in a single international trade deal.  The only one his administration was successfully able to negotiate is USMCA, which came with many concessions, and still waits to be ratified by Congress.  Talks with China blew up last week over Huawei.  Trump declared a tech national emergency, bringing discussions to a grinding halt and the stock market plummeting.  The Dow is still reeling from these latest failed negotiations.  Meanwhile Japan plays nice with Trump because it has made too many investments in the US and doesn't want to see them blow up overnight in a twitter rage.

China on the other hand has decided to play hardball, as "Emperor Xi" figures he has the upper hand here.  One way or the other Huawei will get its 5G technology and make its claim to being the fastest cellphone on the market.  China isn't about to let go control over its industries or ease restrictions on foreign companies to operating inside its huge market.  Many tech insiders are saying that we are moving closer to a two-tier technological world where the US can no longer claim hegemony.  It will be like having two railroad track gauges and having a race to see who has the better rail lines.  The American edge is no longer that significant.

The Trump administration has given up the American upper hand on so many fronts that we can no longer really claim to be the leader of the free world.  The US GDP as a percentage of the world has dropped considerably during his tenure.  It had been on the rise since its low point during the recent recession, but 2017 marked a significant dip of 0.5 per cent.  With so many emerging Asian markets, it was inevitable that we would lose our grip on the world economy, but the Trump administration is making that happen more quickly.

If China were to form a trade union with Russia, Brazil, India and other countries around the globe, the size of their market will be demonstrably larger than the US.  The only recourse is for the US to enter into a similar trade agreement with world economic giants like Japan, Mexico and Australia.  Oh, but we did that.  It was called the TPP, which Trump abandoned his first 100 days in office, and now we are paying for the consequences.

We have been told Trump prefers bilateral deals.  He likes to work one-on-one with world leaders.  You might call it his "charm offensive," which he likes to think is his secret weapon, but the world economy doesn't function that way.  It is all interrelated, and all this bluster over tariffs isn't helping matters any because international companies rely on low tariffs to move their products worldwide as cheaply as possible.  This is particularly true of the auto industry, which Trump keeps threatening to tax.

For Trump the charm, or carrot, doesn't work unless there is a corresponding stick.  He seems to think that all these threats are what brings world leaders to the negotiating table where he can win them over with his charm.  He views this as having been particularly successful in North Korea and now wants to try it on Iran.  He doesn't stop for one moment to think that South Korea and Japan prepared that table for talks with North Korea, or that other Asian countries like Vietnam and Singapore played instrumental roles. Trump thinks that only by sending his ships into the Korean peninsula did Kim Jong-un wake up to the power he projects in the region.  This is what he is now doing in Iran.

The odd thing is that the US had a nuclear deal in place, cosigned by five other nations and the EU, but this wasn't good enough for Trump.  It was a product of the previous administration and he wants a signature agreement of his own to promote on twitter.  It seems Abe Shinzo is willing to help him achieve this goal, as Japan was not a co-signature on the previous agreement and it would allow him to be part of a bold new deal.  Abe may be more quiet but he appears to have a pretty big ego himself.

Anyway, this state visit took a little bit of the sting out of his failed infrastructure summit with Chuck and Nancy.  Maybe Trump will come back in a better mood this week.  He even wants to talk trade with Nancy, no doubt to get his USMCA ratified.  This after saying USMCA was too complicated for Nancy to understand.  We'll see how it goes.