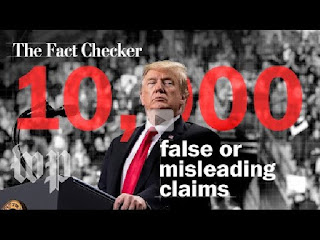 Trump topped the magic number after his rally in Green Bay, where he regaled the audience with whoppers like a doctor and mother conspiring to murder her newborn baby in his grotesque reference to late-term abortions.  Yes, it does boggle the mind but somehow we get used to it.  How do you even begin to sort through 10,000 Lies?

The problem is that the media tries to each week, and before the week is done Trump has added another 80 or more whoppers to the list so the process is never-ending.  He is lying a whopping 12 times per day.  He consumes all the media attention.  There is very little room for others to get a word in edgewise as we are finding out with the roughly 20 Democratic candidates running for office.  The only time we do hear about them is when Trump references one or more of them at his rallies.

His lies range from the relatively harmless boasts, like claiming he once was named "Man of the Year" in Michigan, to the ones that inspire anger and hatred, like his constant assault on his perceived opponents.  He continues to go after Mueller even after proudly boasting that his report "fully exonerated" him, and won't let up on Ilhan Omar despite her answering service being flooded with death threats.

He makes no apologies but is quick to demand apologies whenever he feels he has been slandered by the press.  Unlike Trump, the New York Times did apologize for the widely perceived anti-Semitic cartoon it published this week.

It's not just Trump who lies, but the many others who lie in defense of his lies.  Sarah Huckabee Sanders has taken the brunt of abuse, especially when the Mueller Report singled her out for a number of false statements.  But, Trump has a whole host of apologists ranging from Franklin Graham to Lindsey Graham to Alan Dershowitz, who recently defended Trump against Judge Nap, who had the temerity to call out the the number of obstruction charges in the Mueller Report on Fox News.  Trump made sure to thank Alan on twitter, gainsaying poor Judge Nap and making up new lies in the process, which Judge Nap has since responded to.  It's a circle jerk by every definition, yet we continue to get off on it because it boosts ratings, baby!

Even as Trump's poll numbers sag once again with a majority of Americans saying they won't vote for Trump in 2020 under any circumstances, odds makers still make him a favorite to win re-election.  Maybe they think the Democrats will split, nominating a liberal with a moderate running as an independent to draw votes away from their main candidate, or any number of other scenarios where Trump somehow manages to eke out another term.  To listen to conservative pundits like Hugh Hewitt and Trump strategists, The Artless Liar is going to win even bigger in 2020.

Looking at this map, Trump is going to have a hard time holding onto the Blue States he won in 2016.  The colors have been reversed I assume to imply the dangers facing him in key battleground states like Michigan, Wisconsin, Pennsylvania and Ohio, all of which he flipped last time around.  Things have even turned dangerous for him in Iowa, where his net approval rating stands at -9.  Iowa elected three out of four Democratic US representatives in 2018.  Michigan, Wisconsin and Pennsylvania all elected Democratic governors.  It is pretty hard to imagine a scenario where Trump adds more states to his electoral total.  He will be too busy defending states he won last time around against a surge of Democratic voters.  Yet, Trump has his eye on Virginia.

Much of how well a candidate does in a state comes down to how the state is shaped demographically.  In 2016, Trump did very well in industrial states where NAFTA and other Clinton-era trade deals were believed to have undermined their economy.  After 2+ years of Trump the situation isn't any better.  NAFTA has been rebranded USMCA but is still pretty much the same, and industries haven't exactly surged back into these states.  Farmers are also upset at the cost they had to pay for Trump's ill-advised tariffs.  As a result, his popularity has waned considerably in these once favorable states.

The will to believe is still very strong among his base, but not so strong among the many others who helped vault him to an improbable electoral victory in 2016.  It's not to say he can't still win Iowa or Ohio, but Michigan, Wisconsin and Pennsylvania now all seem a big stretch.  It all comes down to which Democratic candidate he faces next November, and how disenfranchised conservative and moderate Independent voters react to him or her.

We still may see William Weld or John Kasich or Vermin Love Supreme emerge as a serious third party challenge, which could split the independent vote.  Trump has a strong base of about 35 to 40 per cent of the electorate, so if one or more independent candidates could siphon off 20 per cent of the popular vote, especially in key battleground states, Trump has a chance.

The one thing Trump has going for him is that he is always in the news.  His audacious statements on twitter and at rallies are picked up by all the media outlets, become fodder for the late night talk shows and comedy news programs and filter back through social media the next day.  It is an endless cycle, which people seem to enjoy whether they love or hate Trump.  This kind of exposure is pretty hard to beat.

However, this constant exposure also has a negative effect.  Call it Trump Fatigue.  At a certain point people just start tuning out.  This is one reason Mayor Pete became an overnight media sensation.  People were anxious for something new. Biden has also managed to garner a lot of attention as the only viable alternative to Trump in the news media's eyes.  Many political pundits now consider the other 20 Democratic candidates as vying for the number two spot on his ticket.

The lies just keep coming.  Trump will continue to up the ante, hoping to make the price too rich for any Democratic challenger.  He's banging on immigration, late-term abortion, the perils of socialism in the worst possible light.  It's like a demented camp counselor telling horror stories by the campfire.  His crowd eats it up.  No need to ask questions.
Posted by James Ferguson at 11:23 AM