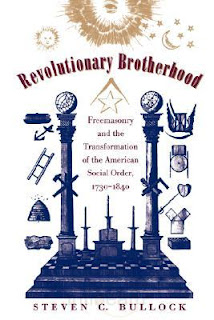 This looks like one of the better books on early Freemasonry in Ameirca, covering the years 1730-1840,

In the first comprehensive history of the fraternity known to outsiders primarily for its secrecy and rituals, Steven Bullock traces Freemasonry through its first century in America. He follows the order from its origins in Britain and its introduction into North America in the 1730s to its near-destruction by a massive anti-Masonic movement almost a century later and its subsequent reconfiguration into the brotherhood we know today. With a membership that included Benjamin Franklin, George Washington, Paul Revere, and Andrew Jackson, Freemasonry is fascinating in its own right, but Bullock also places the movement at the center of the transformation of American society and culture from the colonial era to the rise of Jacksonian democracy.

You can find less expensive copies through amazon.
Posted by James Ferguson at 11:24 AM