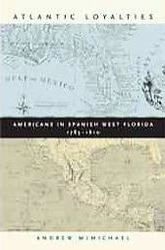 This looks like a good book on West Florida, 1785-1810, entitled Atlantic Loyalties, leading up to the 1810 rebellion.  Maps and illustrations have been withheld by the publisher but it appears the text is all there.
Posted by James Ferguson at 12:31 PM 1 comment: 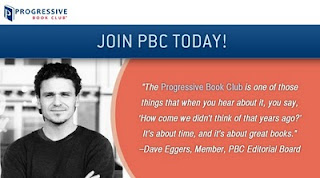 Apparently, the Progressive Book Club was the brain child of Howard Dean last year.  It is an attempt to counter the long standing Conservative Book Club, which dates back to 1964, ironically the year Goldwater ran for president.  The PLC has yet to gain much traction, but one hopes that it actually might grow into something.  My guess is that it will be another political casualty as progressive reading tastes are far too diffused to be as neatly packaged as the stuff they peddle at the CBC.
Posted by James Ferguson at 10:10 PM 4 comments: 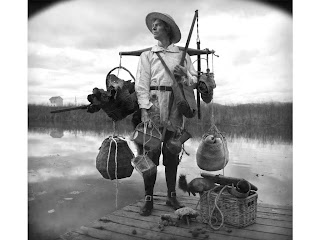 I was going to post something about the right-wing theories about the Puritans being failed socialists -- what will they think of next?! -- but this is a much nicer way to contemplate the holiday. Link to the Times story above.
Posted by avrds at 5:59 PM 13 comments: 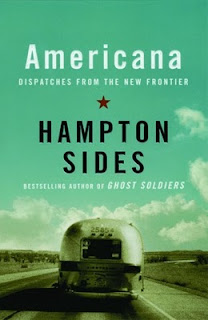 I'm a sucker for a good American travel book, whether it be Steinbeck's classic Travels with Charley or William Least Heat Moon's Blue Highways or Hampton Sides' relatively recent Americana, which somehow bypassed my attention when it was first released in 2004.  Hope to correct that over the holidays.

Wishing everyone a happy Thanksgiving Day weekend!
Posted by James Ferguson at 11:13 AM 1 comment: 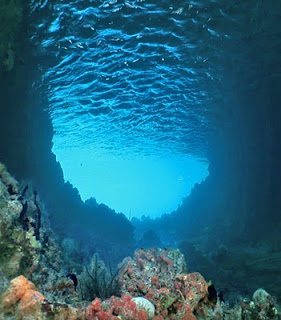 Not exactly American history but this year marks the centenary of Jacques Cousteau's birth, and it is being celebrated around the world.  No person did more to bring us closer to the sea, from his seminal undersea film The Silent World to his amazing Odyssey that became a major part of American television in the 70s.  Wes Anderson paid a fun homage to Cousteau and all things aquatic in The Life Aquatic.
Posted by James Ferguson at 4:01 PM 22 comments:

Here is a copy of Anarchist Voices, an oral history of Anarchism in America, by Paul Avrich.


Avrich's most recent work is a compilation of 180 interviews he conducted over a period of nearly thirty years. Those interviewed were mostly former anarchists, many of whom professed to having kept the faith, though few were politically active at the time of the interviews (approximately 1963 to 1991). Most of the respondents were foreign-born, Jews and Italians dominating the list, with lesser representation from Spanish, French, German, Russian, and Chinese-born activists. Most had participated in radical activities between the 1880's and the 1930's, and, naturally, most were in their senior years when Avrich interviewed them (in fact, many had died by the date of publication). There are also a number of interviews with relatives and friends of anarchists, most of whom were not themselves politically active.
There is no attempt at comprehensive history, elaborate explanation, or analysis. In his preface, Avrich makes it clear that his intention was to "...make them [the interviews] available to students and scholars in an accurate and readable form" (xii). Moreover, the questions he asked directed his respondents to reflect upon the personal as much as the political. What kind of people were they? Why had they become anarchists? What did they want, what did they do to try to get it, and how successful do they think they were? Although Avrich provides brief introductions to the text of every interview, he allows his respondents to answer those questions directly. Their responses, largely unedited, fill nearly 500 pages, providing a fascinating panorama of a variety of beliefs and lifestyles. -- from H-Net Reviews

Avrich was also part of the documentary Anarchism in America. 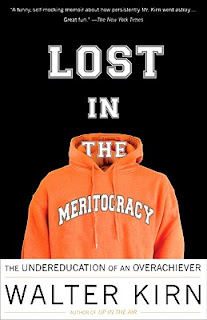 I stumbled across this memoir, Lost in the Meritocracy, while looking for other titles on scholastic aptitude testing.  Walter Kirn retells how he managed to cheat the system,

... the young Walter Kirn quickly learned that achievement could be precisely quantified, but also that the system for arriving at that quantification could be gamed. “I was the system’s pure product,” he writes, “sly and flexible, not so much educated as wised up.” He figured out how to turn a teacher’s question inside out and parrot it back in a simulation of thoughtfulness. If asked, “How does racial prejudice contribute to inner-city hopelessness?” he’d reply, “Is our conception of ‘inner-city hopelessness’ perhaps in itself a form of prejudice?” A maestro of multiple choice, he managed to ace his SATs despite having cracked only three “serious novels” by the age of 16: “Frankenstein,” “Moby-Dick” and “The Great Gatsby.”
Posted by James Ferguson at 8:11 AM 2 comments: 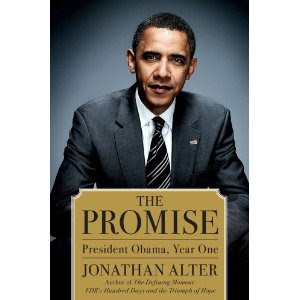 I started this book in the a.m. and haven't been able to put it down. I read Alter's book on FDR, and wasn't at all impressed. But then I read that after we all read Schlesinger and he's a tough act to follow.

Alter's not a historian but rather a reporter, so he sees this book as the second draft of history -- enough removed to consider it "history," but still relying on his reporting skills to get the story down.

It's tough reading about how amazingly smart and capable this new administration is (or at least was starting out), knowing what we know now.
Posted by avrds at 10:07 PM 23 comments: 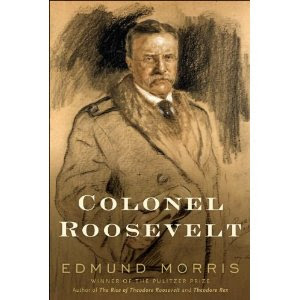 Just arrived in the mail..... I'm really looking forward to reading this one.
Posted by avrds at 5:55 AM 37 comments:

For Something Truly American, How About This..... 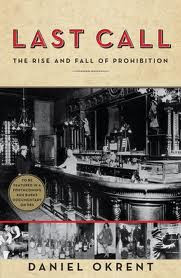 World that Never Was 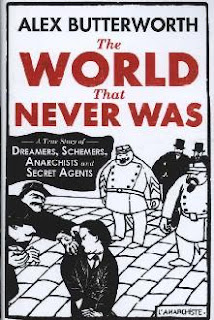 The opening for this book is fascinating. This is the English edition (review linked above) -- the American edition is much more sedate. Surprisingly large amount of the text is available online:

Measuring Up to the Big Test 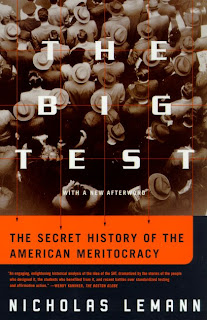 Scholastic testing has long come under fire.  It was interesting to see that Nicholas Lemann had written a book on The Big Test, in which he questions the meritocracy the tests were supposed to inspire.   Lemann apparently stretches his argument a bit thin as he links the early attempts at Harvard to establish an entrance exam with the 1996 fight over Proposition 209 in California.

There are other books written on the subject of testing, including Daniel Koretz' Measuring Up: What Educational Testing Really Tells Us, which has received very favorable reviews.

Interesting topic for discussion, since standardized scholastic testing has become the chief instrument for admissions into universities, sometimes making it difficult to establish the diversity most universities are looking for in their student body.
Posted by James Ferguson at 11:52 AM 35 comments: 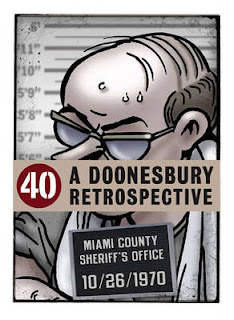 The 40th anniversary of Doonesbury passed me by.  Here's a nice write up in the Guardian.  Not much interest in American political cartoons over here.  This looks like a fabulous collection from Andrews McMeel Publishing.  I loved what they did with Calvin & Hobbes and The Far Side.  Both collections sit proudly in my attic office.  Actually read through the entire C&H with my daughter, who absolutely loved it.

To me Doonesbury is an indelible part of contemporary America.  Trudeau has been able to stir a few hornets' nests over the years and his characters have aged wonderfully.  I can't think of any political cartoon that has left such a stamp on the American imagination.
Posted by James Ferguson at 11:39 AM 4 comments: 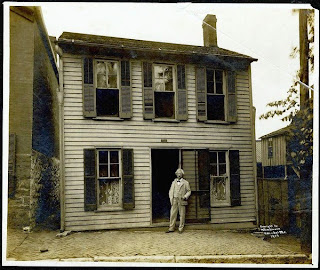 A review is linked above. Apparently, the official release date is November 30 -- Twain's 175th birthday -- which may be why the reviews have taken so long on this one (I thought it was maybe because the author was dead).
Posted by avrds at 4:58 PM 8 comments:

The Pity of War 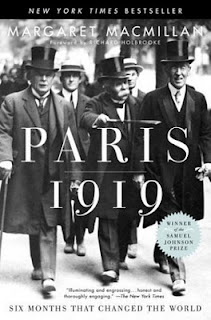 Thinking of Armistice Day, this book came to mind.  I believe it was the subject of one of the NYT reading groups way back when, but I didn't read it at the time.  Here is an interview with Margaret MacMillan from 2002.  Another book is Niall Ferguson's The Pity of War, which explores the economic as well as military impact of the war, focusing more on the origins of the war than its aftermath.  Looks like he explores the war more from the British perspective.

World War I has pretty much faded into the background, but in reading The Warrior and the Priest I find my interest renewed and look forward to any other suggestions for reading material.
Posted by James Ferguson at 1:02 PM 4 comments: 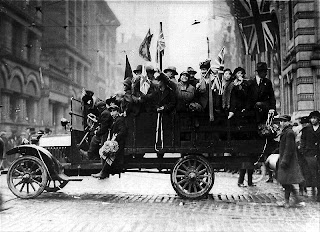 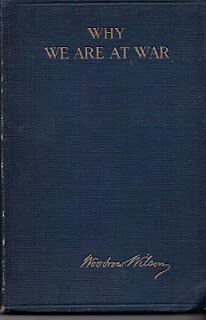 Here is the full text of the book, Why We Are At War, which is a collection of Wilson's "war speeches," most of which were directed to Congress.  There is also a speech calling for "A World League of Peace."
Posted by James Ferguson at 8:41 AM 2 comments: 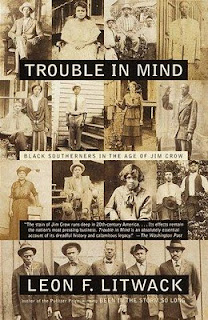 I find myself now reading Trouble in Mind, by Leon Litwack, which deals expressly with the Jim Crow Era in the South.  This was one of the books Chartres had recommended years ago.

The first chapter entitled Baptisms is a collection of oral histories which describe the cruel and often dehumanizing treatment Blacks suffered in the South.  Some very appalling stories.  There are recollections by Louis Armstrong, Ralph Ellison, Rosa Parks, Richard Wright, among others.  What makes these stories deeply unsettling is that the Federal government did nothing to stop the disenfranchisement of Blacks in the South.  Surprising, when you consider that Rutherford B. Hayes relied on Black Republican votes to win key Southern states in the hotly disputed 1876 election.

Subsequent Presidents played lip service to Blacks, but no President was willing to step out on the limb and enforce the new Constitutional amendments, essentially allowing the Southern states to roll back all the hard-earned gains made by Blacks in the South.  No book better described these gains than W.E.B. DuBois' Black Reconstruction in the America.

C. Vann Woodward covered much of this ground in The Strange Career of Jim Crow, but it appears that Litwack goes much further in his exploration of this troubled era.
Posted by James Ferguson at 1:59 PM 7 comments:

Warmth of Other Suns 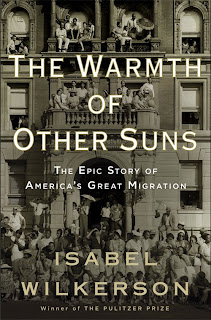 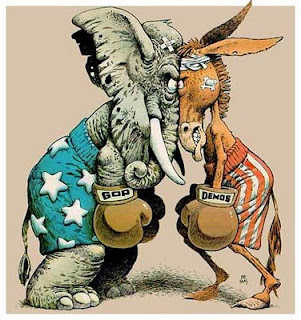 It was a rough fight with no clear winner, except John Boehner who can finally claim the throne of Speaker of the House, bringing his buddy Eric Cantor in as Majority Leader.  An ugly combination that will ruthlessly fight Obama the next two years.  But, the consolation for the Democrats is retaining the Senate, so there isn't much the House can do except make a big stink.

The Tea Party managed to win a few key seats as Republicans, but Palin's "Grizzly Moms" didn't fair so well, which I think is a repudiation of Palin's influence over the GOP.  In the end, the election shook out pretty much along traditional party lines, with the GOP regaining seats throughout the South and West, and picking up a few in the Midwest, while the Democrats held their ground in key Blue States.   The same old intractable politics.
Posted by James Ferguson at 8:41 AM 45 comments: 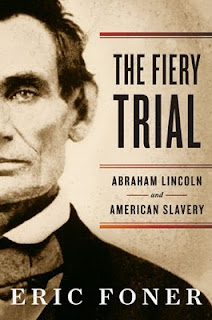 Just when you thought nothing more could be written on Lincoln, Eric Foner comes out with a new book that tackles Lincoln as the Great Emancipator.  By focusing on Lincoln's political background, Foner hopes to resolve some of the inconsistencies that surrounded his views on slavery and emancipation.  I thought that William Lee Miller did a pretty good job of exploring Lincoln's texts in Lincoln's Virtues, so it would be interesting to see what more Foner finds in probing Lincoln's records.
Posted by James Ferguson at 2:34 PM 8 comments: 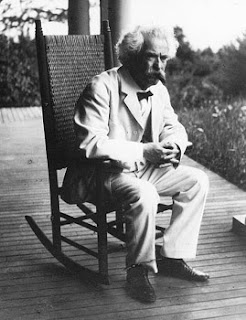 Received my copy the other day and it weighs a ton.  This is the first in a proposed three-volume edition put out by the University of California Press and the Mark Twain Project, where you can view the text on-line.
Posted by James Ferguson at 10:57 AM 3 comments: 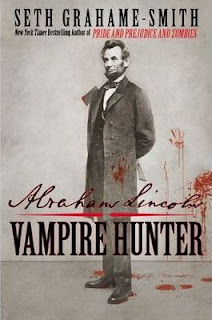 In the Halloween spirit, albeit a day late, there is this fun title that has received some very positive reviews.  Apparently, it will soon be made into a movie.
Posted by James Ferguson at 6:27 PM 3 comments: