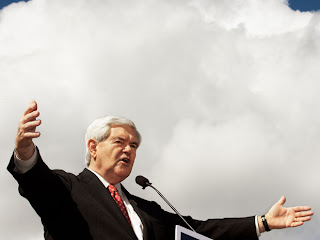 Yep, it seems Newt is really serious about this moon base,

"By the end of my second term, we will have the first permanent base on the moon, and it will be American," Gingrich promised during a speech in the city of Cocoa, on Florida's Space Coast, Jan. 25.

The daffy one just can't seem to let go of this notion despite the absurd timetable he set,

"When we are not expecting a U.S. crewed launch to the ISS until 2016-2017 and are just getting started on a lunar-class launch vehicle, establishing a lunar outpost by 2020 is a fantasy," space policy expert John Logsdon, professor emeritus at George Washington University, told SPACE.com via email. "It would be much better to set realistic goals, but that is not Mr. Gingrich's strong suit."

But, as usual Jon Stewart gets the best dig.

Posted by James Ferguson at 9:50 AM