The Year of Bushehr 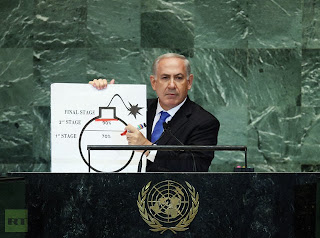 A little over a year ago Benjamin Netanyahu made this memorable display in front of the UN assembly and ever since has been pushing hard and heavy for the Obama administration to drop the bomb on Iran.  So, imagine Bibi's surprise when the US brokered a historic peace agreement that would curb Iran's nuclear weapon development and bring Iran back into the international fold.

Republicans don't know quite how to react to the deal, which is still being worked out.  What began as shuttle diplomacy evolved into face-to-face talks between American and Iranian foreign representatives for the first time in over 30 years.  It seems the specter of the infamous 1980 hostage crisis may have been finally lifted.

This isn't the first time Iran has approached the US and vice-versa.  Back in 1998, the US and Iran had a friendly soccer match and Presidents Clinton and Khatami seemed to be reaching out to each other before the Monica Lewinsky dominated the headlines and led the House Republicans to impeach Clinton.  While Clinton managed to survive this political shit storm, any attempt to normalize relations with Iran was lost and the development of the Iranian nuclear program was restarted after having been put on hold for many years.  Ironically, the Iranian nuclear program was initiated by the United States back in the 1950s as part of the Atoms for Peace program commemorated in this stamp.

Even more ironic, the Ayatollah Khomeini considered such weapons an affront to Muslim ethics and jurisprudence and signed international treaties repudiating such weapons, including the Nuclear Non-Proliferation Treaty.  It wasn't until the 1990s that Iran approached Russia to help complete the reactor begun during the Shah's regime.  Work began in 1995, moving forward in fits and jerks, before the reactor was finally completed in 2010, which was officially declared the Year of Bushehr, much to the chagrin of the international community which had made every effort to stop the project, fearing Iran would have the ability to enrich uranium for military purposes.

It seems we need our bogeymen, and certainly former President Ahmadinejad fit the bill.  Since the election of the more moderate Rouhani as President, the world appears to be looking at Iran in a better light, but of course Israel still views Iran as international enemy no. 1.

Posted by James Ferguson at 7:26 PM