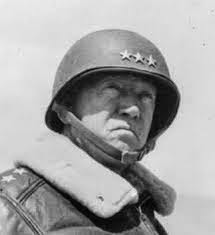 Bill O'Reilly is not the first to explore General George S. Patton's untimely death.  Robert Wilcox dug into the long dormant case back in the 1990s and came out with a book in 2008, Target Patton, in which he puts forward the conspiracy theory that there were those who wanted the flamboyant general out of the picture.

Much of the theory rests on interviews between the author and Douglas Bazata.  Wilcox reported that Bazata said the Soviets were called in to finish the job after Patton apparently recovered from a car crash in Manheim, Germany.  This after Bazata supposedly was ordered by General "Wild Bill" Donovan to drive a truck into Patton's car.  Donovan was head of the OSS at the time.  Wilcox claimed that Bazata confessed all this to him in a 1999 interview, and found diary entries after Bazata's death to back up these assertions.

Douglas DeWitt Bazata was a highly decorated war veteran, who enjoyed a colorful life that had him brushing shoulders with everyone from Salvador Dali to Princess Grace of Monaco.  Who knows what kind of stories Bazata told in social circles, but it led British art critic, Michael Webber, to remark that Bazata had "a life eventful for a dozen novels."  He gave up painting and wine-making and settled in Maryland in the 1970s.  Ronald Reagan's Navy Secretary John Lehman thought well enough of Bazata to ask him to serve as his special assistant.

It's always fun to delve into conspiracy theories decades later and imagine the what-ifs, which Wilcox does by suggesting Dwight D. Eisenhower might never had become President if Patton had lived.  Patton apparently thought there was a deliberate attempt by Eisenhower to thwart his drive on Berlin.  Old Blood and Guts desperately wanted to get to the German capital before the Soviets, so that the US would get a more favorable slice of the pie.  Patton apparently held enough secrets of the war that he could have ruined careers if they had ever came to light, assuming of course the old warhorse would ever had divulged such secrets. 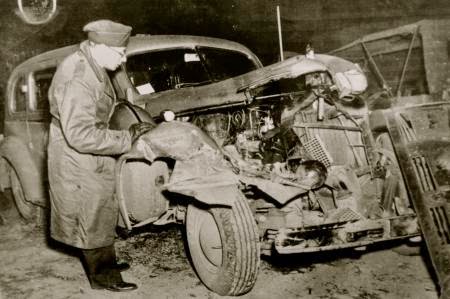 These seem to be more Wilcox's musings than anything else.  Hard to believe Bazata carried this startling revelation with him all those years and then admitted it to Wilcox on his "death bed."  Turns out Wilcox is part of the new Right Wing history industry that revels in such conspiracy theories.  When you search for Douglas Bazata, the various sites all seem a little too quick to point out that he was a Lebanese Jew.  There is a strong anti-Semitic note that seems to underlie these nefarious charges, reminiscent of the Dreyfus Affair.

Bazata wasn't even involved in the crash.  The truck in question was driven by Technical Sergeant Robert L. Thompson, who apparently made a left turn in front of the general's car, and the driver was unable to avoid a collision.  General Patton died of pulmonary edema and congestive heart failure 12 days later.   Complications which arose from the damage to his neck and spinal chord that had left him paralyzed from the neck down.

One can only imagine what Baba O'Reilly will do with the story.  Once again he calls on his historical sidekick, Martin Dugard, to help research the case, but why do we even need to persist in such conspiracy theories?  Killing Patton is due out September 23, and will no doubt vault to the top of the bestseller lists.
Posted by James Ferguson at 1:05 PM