The Ministry of Reconciliation 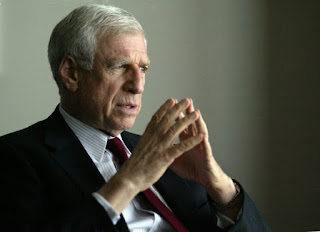 John Danforth thinks that if President Obama had just invited members of Congress to dinner we wouldn't have all this acrimony we have in Washington.  He imparted these thoughts and others in a lengthy interview for Salon, mostly to plug his new book, The Relevance of Religion, in which he thinks religion can serve as a reconciliation force in politics.  Late in the interview, he points to George Bush being an example of this, saying "I don't see him as being an in-your-face, full-of-himself type," which is apparently how he sees Obama, who is too arrogant to invite Congresspersons to dinner.

Obama had been accused of aloofness before, so at the beginning of 2015 he made a New Year's resolution to have a drink with Mitch McConnell and let John Boehner beat him again at golf.  Typically, dinner time is family time, which he said would be the case when he entered the White House with his young family.

At 79, I suppose we can forgive former Sen. Danforth for forgetting what it is to be both a politician and a father, but why trot out this tired allegation?  It's not like Obama has avoided members of Congress.  He has often met with them to hash out legislative differences, but unfortunately these talks have broken down along ideological lines, mostly within the Republican Party, which has been steered by the Tea Party ever since 2010.

Danforth does note the divisions in his party and how these need to be reconciled, but like most Republicans puts the blame on Obama for the divisive nature of politics these days.  While it would be nice to think that the GOP would be more obliging if only the President would be too, the last seven years have shown little indication of this.  Time and again, the President has tried to broker compromise in Congress only to see it blow up in his face.  When Congress was deadlocked at the end of 2010, with the threat of a government shutdown looming, Obama pushed fellow Democrats to extend Bush-era tax cuts to break the impasse.  It was a very bitter pill to swallow for Democratic leaders, who had fought against these extensions, but it did open up the floor to get the notorious "Don't Ask, Don't Tell" policy repealed and other matters Obama wanted closed.  This is the kind of pragmatism Danforth apparently wants to see in Washington, but is loathe to admit Obama is that pragmatist.

It seems Grandpa John would like us to return to the days when his mentors, Robert Dole and Howard Baker, were the top Republicans in Congress.  These guys knew how the legislative process worked and sought compromises in the spirit of reconciliation.  Today, Danforth believes the ideological rift is so wide that neither side is willing to compromise on any issue, even though we recently saw Obama steer the Trans-Pacific Partnership through Congress. largely with the support of Republicans, as many Democrats were staunchly against it.

As he says, politics is not religion and we should view it as a legislative process not an ideological one.  This is exactly what Obama has tried to do, yet has been met with staunch opposition such as his attempt to broker a long range budget plan that would reduce the deficit by $4 trillion.  One could argue the numbers, but instead of negotiating a deal Boehner walked out, mostly for political reasons as he didn't want to sign onto anything that could keep Obama in power four more years.  It was at the height of the 2012 election year, and Republicans were determined to run Obama out of Washington.  Even after the President won re-election, the Republicans refused to sign onto any sweeping budget plan that wasn't in their interest, despite having suffered another big election defeat.

This was more the politics of spite than it was reconciliation.  When Republican Senators signed onto a sweeping immigration reform bill in 2013 with the hopes of reconciling themselves with Hispanics, John Boehner refused to bring the bill to a vote in the House, determined to use immigration as a divisive issue in the 2014 midterms.  The Republicans may have won the battle, but they appear to have lost the war as they have completely turned off the fastest growing demographic group in America.

That brings us to the Republicans' new nemesis, Donald Trump, who has driven the wedge even deeper with his outlandish views on immigration.  Trump's popularity among Republican core voters has Danforth "absolutely bowled over."  Grandpa John seems at a loss for words as to how this bull got loose in the Republican china room, yet all he has to do is look at the growing dissatisfaction within the conservative movement at the Republican Party leadership.  In fact, it was long-time operatives, Newt Gingrich and Dick Armey, who split with the Republican establishment after their falls from grace and spearheaded the Tea Party movement.  Donald Trump is simply the latest incarnation of that dissatisfaction.

If Danforth thinks that religion can serve as a bridge toward reconciliation he is senile.  What we see today is old time religion combining with Ayn Rand's Objectivism to create a political monster that the Republicans have been trying to hide for decades.  The so-called Moderates were in control at one point but with the devastating loss by Romney in 2012, the base of the party has given up on moderation and now wants a Trump-style revolution, which we have long been trying to avoid in the United States.  The Tea Party wants the reconciliatory Republican heads served on a Louis XVI platter.  How Danforth's brand of Episcopalianism is going to soften the hard differences is anyone's guess, but I doubt you will find the answers in his book.