or The Madness of King Trump 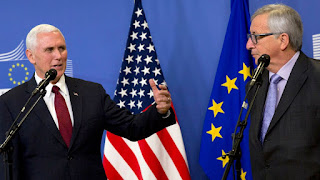 To this point, Mike Pence, or Mike "Pants" as my wife calls him, has been "good cop" to Trump's "bad cop" in the latest version of a Marvel crime fighting duo.  However, it is starting to appear that Vice President Pence is cultivating larger aspirations.  His European tour was a big hit, making a strong impression on European leaders and Bono alike for his level-headedness and commitment to international norms.

Meanwhile, the evil Dr. Bannon appears to be tending the stables of the Four Horses of the Apocalypse, waiting for that propitious moment to usher in Armageddon.   Things didn't work out very well with one horsemen, Milo Yiannopoulos, who has been dumped after his comments on pedophilia. The conservatives' "boy toy" tried to start a riot at Cal-Berkeley only to see his own reputation go up in flames.

It is really hard to understand what is going on in this White House.  There seem to be two main rival camps, one led by Pence and the other by Bannon.  Some say there is also a Priebus camp, a hybrid camp if you will, that tries to act as the middle way. Then there is the family camp led by Jared and Ivanka, which holds considerable sway, Trump being the family man that he is.  There also appears to be rogue warriors like Kellyanne Conway, anxious to carve out her own niche in the White House.

Increasingly, Mike Pence is emerging as the most reasonable voice emanating from the White House, offering assurances after his commander-in-chief's twitter-tantrums.  How much influence Pence really has is a matter of speculation, but it seems to be growing as more persons are turning to him to bring stability to the chaos that has plagued His Trumpness's first month in office.

I get the sneaky suspicion a coup is in the works.  Republican Senate leaders appear to have had their fill of Trump and are now looking for a way to get rid of him.  Pence is clearly their man.  The only potential problem is how much the former Congressman and Indiana governor was involved in the shenanigans surrounding Mike Flynn.  He claims to have been out of the loop completely, but a thorough investigation may say otherwise.  If Mr. Pence emerges as the only clean member of this foul administration, he is the heir apparent to the oval office, because it seems Congress is finally gearing up for full investigations into Russiagate.

Trump is obviously deranged.  His presser and subsequent rally in Florida sealed the deal.  The Sweden gaffe is the worst yet, as it has led to a flood of tweets, including several from the former Swedish PM, and an amusing video mocking His Trumpness.  He has truly become an international embarrassment.  He had to postpone his planned visit to the UK to avoid further embarrassment. Nevertheless, the core of the conservative electorate sticks with him, completely absorbed in his madness.  So, Republicans have to tread softly so as not to risk an ugly uprising in their party that could spark violent clashes.

Fortunately for them, Pence is seen as a pillar of the religious conservative community and an acceptable alternative to King Trump.  Congressional Republicans would love to ease Trump out and not have to go through the ugly spectacle of an impeachment.

But, here they run into the evil Dr. Bannon, who is not going to go down quietly.  He has been pulling the levers from day one, trying to keep Trump in line with the alt-right world that he justifiably believes is who put him into the White House in the first place.  But, Trump is wavering, as he is forced to come to terms with the enormity of his responsibilities.  He can no longer simply sign off on Bannon's hastily contrived executive orders, as they not only have failed to hold up in court but literally drive a knife right down the middle of the country.  So, Trump is beginning to defer more and more to other counsel, marginalizing Bannon and the radical conservatism he represents.  Still, the evil doctor has strong influence as witnessed at the Florida rally, a tailor-made event to satisfy the alt-right.

This will be a huge test of the GOP.  A successful transition of power from Trump to Pence would bring a measure of stability back to the Republican Party and restore faith in America as a global leader.  Trump has sorely tested the world's patience, even that of Putin.

Maybe this was the game plan all along, it was just that the evil Dr. Bannon wasn't privy to it?  We can only wait and see how it plays out.
Posted by James Ferguson at 9:22 AM